You are at:Home»Current in Carmel»Carmel Community»CarmelFest Has Talent winner waiting for encore 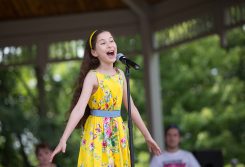 Anjali Rooney performs at the 2015 CarmelFest Has Talent. (Submitted photo)

Anjali Rooney is eager for her next appearance at CarmelFest Has Talent. She is just going to have to wait two years.

Rooney, a Clay Middle School sixth grader, captured first place in the CarmelFest Has Talent vocal competition in the 12-and-under group July 4, 2015. Rooney, who turned 11 on July 16, is not eligible as a past winner to return to the same age division. She will be eligible to compete in the 13-17 group in 2018. There is an 18 and older group as well. Applications are being accepted now for the July 3 and 4 competition.

“It was an amazing experience,” Rooney said. “I would love to do it again. Everyone on that stage was incredibly talented. It’s not easy getting up on a stage and singing in front of everyone.”

Since CarmelFest, Rooney has appeared in “South Pacific” last fall at Beef & Boards Dinner Theatre and as Jane Banks in “Mary Poppins” at Booth Tarkington Civic Theatre over the winter. She will portray Shprintze in “Fiddler on the Roof,” which runs April 22 to May 7 at Civic Theatre in Carmel.

“‘Mary Poppins’ is a joyful fun show for families,” Rooney said. “‘Whereas ‘Fiddler’ is also a fun, family show but is very dark if you look at it from one side. They’re very different. I love doing both of them. The cast is incredibly nice as well.”

Rooney has strong ties to “Fiddler on the Roof.”

Rooney has been accepted into Indiana Repertory Theatre’s Summer Conservatory. Her future goals include performing at IRT and Actors Theatre of Indiana.