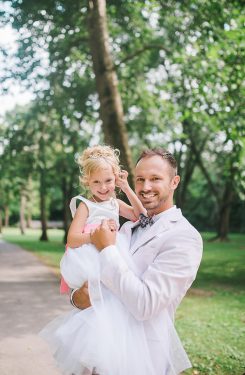 The Carmel resident, a stand-up comedian, has shared that connection while they travel around the nation to comedy clubs. They’ve enjoyed two elegant daddy-daughter dances in Kokomo, where Gardner grew up.

Gardner said he believed it was time to have an event like that in Indianapolis, so he started planning the Enchantment Ball, which will debut at the Conrad in Indianapolis from 5:30 to 9 p.m. June 4. The evening includes dinner, dancing and carriage rides. Gardner said the target ages are 3-13, but it’s up to the discretion of the parent.

“I really want to make it a night to remember for the girls,” Gardner said.

Gardner said the numbers might be low this year, but he sees it growing each year.

“It’s an awesome night for dads to bond with their daughters,” Gardner said. “A lot of my mail comes from single mothers who say I wish my daughter’s dad would do this. Women are naturally awesome parents, it’s kind of in their DNA. Guys have to try harder.”

The key for him is to be interested in whatever his daughter is, Gardner said.

“Right now, it’s dressing up like a princess and being a girly-girl,” Gardner said.

“I’m getting big enough to the point where I can cherry-pick my gigs and travel less,” Gardner said. “She’s traveled with me on the road for quite awhile. Now it’s traveling for Friday and Saturday shows. When I first started off, it was traveling two weeks at a time.”

Gardner shares custody with Helena’s mother, who also lives in Carmel. Helena will enter kindergarten at Carmel Elementary School in August so they will have to scale back their trips.

The cost of the Enchantment Ball is $169 per couple. For more, call 317-647-0909. During the event, the girls will fill backpacks for less-fortunate kids.