You are at:Home»Current in Carmel»Carmel Community»Plum Creek residents concerned about potential development near golf course 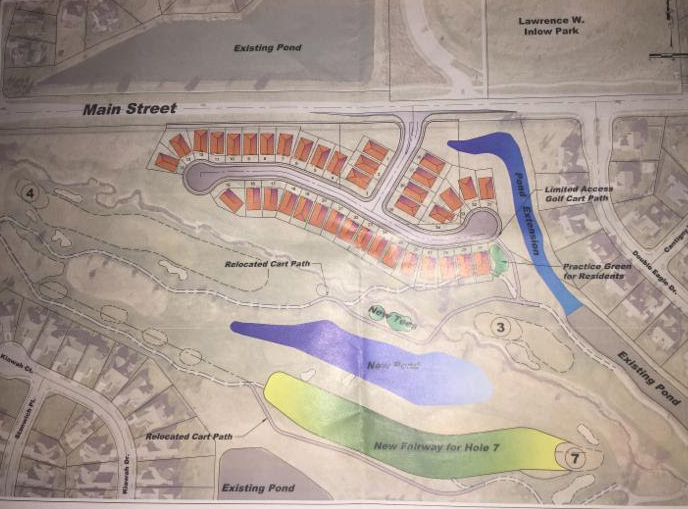 Many Plum Creek Farms residents have expressed concern after seeing plans for 40 new homes near the golf course. (Submitted photo)

Residents in Plum Creek Farms of Carmel have circulated a petition against a potential development near the golf course. A drawing hanging in the golf course clubhouse has displayed plans for 40 potential empty-nester homes.

Meanwhile, no plans for development have been submitted to the City of Carmel. No developers have reached out to the Carmel City Council and no meetings have been organized to talk to residents.

“This is one of the strangest things I’ve encountered in terms of development,” said City Council President Ron Carter, who lives in Plum Creek. “No one has ever put drawings out of a possible development without ever having filed with the city, especially when there would be so many obstacles that would come up against it if the owner or developer did file.”

Bill Ranek, president of the homeowners association for Plum Creek, said residents are concerned about increased density. He said they are also concerned that building these homes would require rezoning the area from its protected P-1 zoning, which is meant to protect parklands and golf courses. He said existing home values could be negatively affected by this new construction and many homeowners on the golf course paid a premium for their location, often between $17,000 to $69,000 more when they bought their homes, depending on the lot.

Carter said there is no need to worry because he doesn’t think it’s likely the project is likely to happen.

“It kind of reminds me of the local television weather folks who spend two days whipping up the viewers with a threat of 14 inches of snow based on only the fact that it is winter and they want exposure. Then no snow comes,” Carter said. “Something could be filed, but I don’t get the impression this will ever get off the ground.”

Carter cites various roadblocks for the potential project to begin. Not only would the city council have to rezone the land, but there is land that the city would have to sell to the developer first. In the most efficient scenario possible, Carter said the council could vote on a proposal in late October because so many government entities and commissions would need to give approval, such as the Technical Advisory Committee, the Carmel Plan Commission and the Indiana Dept. of Natural Resources.

Plum Creek general manager Jerry Hayslett said the project is very early on in its planning process and directed all questions to Mark Zukerman, who was hired as a consultant to help plan the potential development. Hayslett said he didn’t think anything was immediate with the project.

“I don’t even know if that’s even going to happen anymore,” he said.

Zukerman said something could be submitted to the city by the end of the summer. He said he plans to schedule meetings with neighbors in three to six weeks that would help formally begin the process.

“It’s kind of the cart before the horse,” Zukerman said. “Once we are further along, we’ll plan a series of meetings and we would reach out to any affected neighbors and meet with them. Right now, there’s a plan that’s kind of gone around but we need to finish the due diligence and then provide meeting times for everyone to learn about it.”

Mike Hollibaugh, director of planning for the City of Carmel, said he’s been told that Plum Creek is essentially “testing the waters.”

“While there is some chatter about a small housing project on the course, we have nothing good to contribute to a report,” he said. “This has been simmering for more than a year.”

Carmel City Councilor Sue Finkam, who represents the district that includes Plum Creek, sent out a newsletter e-mail letting people know about the proposal. It would be in an area adjacent to E. 131St Street to the north, Double Eagle Drive to the east, and the legal drain transecting the property to the southwest.  The price range for these new homes would be between $350,000 and $450,000. Two new ponds would be added, one to act as a buffer between existing and new homes. It is anticipated that these ponds will improve the issues with flooding in the area.

Plum Creek is doing some construction on the golf course, affecting some holes. The equipment has neighbors talking.

“I’ve been told that the golf course is telling people that this is to improve existing flooding that occurs, but residents are concerned that this is a move to get ready for adding new homes (and) density to the area,” Ranek said.

Several residents brought the matter up during a public forum held by City Councilor Jeff Worrell, who does not represent the district that Plum Creek is in. One of the main issues discussed was the protection of P-1 zoning.

Plum Creek resident Jeff Melin said green spaces throughout the city could be threatened if the city rezones this protected parkland, which was created in 2004. He said it could have a “snowball effect.”

“Rezoning from P-1 would set a dangerous precedent,” he said.

Melin also mentioned the effect on property values. He said the homes in Plum Creek originally sold for anywhere between $250,000 and $500,000 and nobody wants to see home values decrease.

“We changed zoning in all of our parks and I was a proponent of this,” he said.

After the public forum, Worrell and Carter met with Zukerman to discuss the proposed plans for Plum Creek. Both of them said they left with the impression that nothing was imminent.

“We can’t really be for or against the proposal since nothing has been submitted,” Worrell said.

Brainard said he does not want to comment on the development until something has been submitted.

“We generally don’t comment on these projects until the plan commission has had a chance to hear this matter,” he said. “But it’s the developer’s right to petition for this and it’s the public’s right to speak out and remonstrate if they don’t like this project.”

Finkam also said she wants to wait to see any plans before commenting on the project. One the one hand, she said she likes the idea of more empty-nester homes, but she said she always wants to protect parks and green space.

Carter noted his main disagreement with the petitioners comes from the fact that he doesn’t think the project is likely to happen. He said he’s been trying to get Plum Creek to repaint the fence around the golf course for about two years and nothing has happened. That’s strained some relationships with the council.

“The council doesn’t appreciate a would-be developer that introduces a project in the public domain to adjoining residents and doesn’t speak to us and doesn’t really have anything in hand at the Dept. of Community Services,” he said. “It’s just not the way to do business … At this point in time, I don’t see us doing a rezone. I don’t see us selling anything to the developer.”

Zukerman said he believes when the final plans are unveiled, he thinks people should be happy.

“We want to do something the community can be proud of and provide something that isn’t being offered,” he said.