You are at:Home»Current in Zionsville»Work to begin in June to improve I-65 interchange at Whitestown Parkway 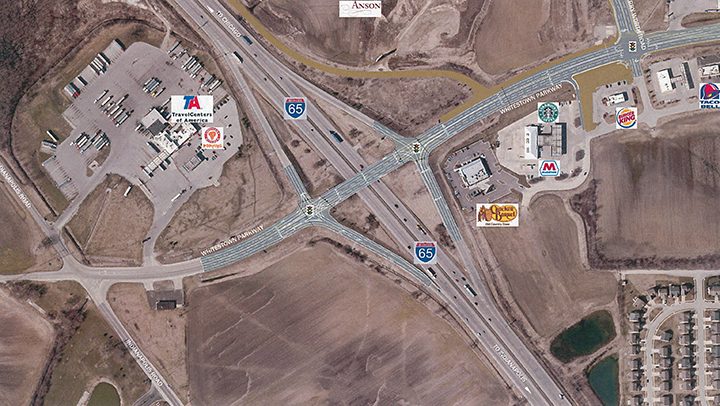 Construction to improve the interchange at I-65 and Whitestown Parkway will begin in June. (Submitted image)

A project to ease congestion along Whitestown Parkway at the I-65 interchange at Exit 130 is set to begin in June. The $1.6 million project will add lanes for drivers entering or exiting I-65, which is expected to help rush hour traffic flow through the area once complete.

“The ramps will be expanded, two-lane ramps going north and two going south,” Whitestown Town Manager Dax Norton said. “When you get off the interstate, you are getting off on one lane, and (after construction) you will be able to get off on two lanes.”

Access to and from I-65 at Exit 130 is not expected to be closed at any point in the project, but some lanes will be restricted at certain times. Whitestown officials are urging motorists to expect delays. They plan to post specific closures on the town’s Facebook page. Construction is expected to wrap up in September.

Drivers are encouraged to become familiar with alternate routes to help ease congestion during construction. Possible routes include Exit 133 for drivers heading north and Indianapolis Road/Lafayette Road for drivers going south. Lafayette Road reconnects to I-65 at 71st Street. Local drivers in Zionsville are encouraged to use Ford Road or Zionsville Road to access 86th Street or I-465.

Plans to improve the interchange began in late 2014 when Norton reached out to state officials to see what could be done.

“Some residents in the town were a bit concerned about congestion on the interchange,” Norton said. “I went with a group of people to INDOT to inquire about reconstruction of the interchange.”

After learning that reconstruction was not on INDOT’s short term list, Norton worked with town engineers to draw up a plan for the interchange.

“In 2015 we negotiated with INDOT, and they were great partners,” he said. “They approved us to work on their infrastructure and gave us a right to do so.”