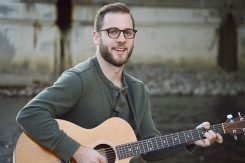 Paul Whitacre, of Zionsville, is working on his album, “Coming of Age.” (Submitted photo)

After graduating from Ball State University in December, Zionsville’s Paul Whitacre has moved onto the next step in his life. His first album, “Coming Of Age,” is set to release this summer.

Whitacre received his first guitar before age 15, but he didn’t feel passionate about music at the time. He got involved with the worship team at his church during high school and college, which was when Whitacre began writing his own songs. The passion grew during Whitacre’s junior year in college when he joined forces with a friend, Clay Langebartels.

Langebartels, along with his brother Bryce, have been helping Whitacre produce his first studio album. Titled “Coming Of Age,” the album tells Whitacre’s story of the transitions in his life through high school and college. It consists of 12 original pieces, which he wrote over the course of four years.

Whitacre said his music is not part of the Christian music genre, but the songs on this album are based off of his Christian faith.

“They’re ordered in a way that tell the story of me going from being more immature and making bad decisions, to realizing a need for God,” he said.

Whitacre didn’t have confidence in his writing until he repaired his relationship with God. This gave his songs meaning, which led to the creation of his goal: making music with a purpose.

“I made it a mission of mine to try to … write music that has a little more substance to it,” Whitacre said.

He said he hopes to create another album in a few years and continue growing his music career.

“I’ve got a goal of moving down to Nashville and pursuing (music) there within five years,” he said.

Meanwhile, he posts live performance videos on his YouTube page as well as his website, paulwhitacre.com. Whitacre said he hopes the new album will be available on iTunes and Spotify in late July.