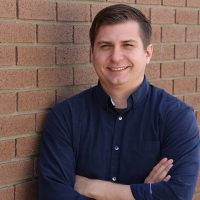 By day, Ryan McCurdy is a news promotions producer for WEHT-25, an ABC TV affiliate in Evansville.

“Filming is what I do on the side and what I really want to be doing,” McCurdysaid

The 2007 Carmel High School graduate, wrote and directed “Misread,” which is about a man down on his luck who takes a job running errands.

“But he ends up driving around a woman who can read lips for corporate espionage and he gets in over his head,” McCurdy said.

The 19-minute film won the Audience Choice award at its premiere at the MayDay Film Festival in Evansville May 20.

“It’s surprising. I didn’t expect it to get the reaction it did at MayDay,”McCurdy said. “People seem to really like the movie. It’s has a lot of suspense and keeps people on the edge of their seats.”

McCurdy, who graduated from University of Southern Indiana in 2012, is trying to get the movie included in other film festivals. McCurdy, 27, started out as a news photographer at WEHT.

“Before I went off to college a couple of friends from Carmel and I made a mini-web series that started the passion and ever since I wanted to be a filmmaker,” McCurdy said.

This is one of the longer films he has produced. The movie, filmed in Evansville with area actors, stars Kevin Arnold, Rusty James and Alyssa Rhoads. The original music was by Daniel Roach.

McCurdy, whose parents Scott and Diane still live in Carmel, said it took two months to produce the film.

“I’m more focused behind the camera and don’t do any acting, but I have done cameos or extra parts for friends’ films,” he said.