The June 16 announcement that David Bowden will be departing after 17 years as Carmel Symphony Orchestra artistic director and conductor has created quite a stir. 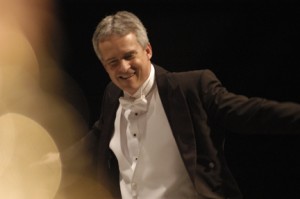 Jen Weber, who plays cello for the CSO, said a group of 25 musicians met to discuss why they were not consulted before an email came out stating Bowden would conclude his tenure in a Nov. 12 concert at the Palladium. Weber said about a dozen musicians, including herself, have said it will be their last concert as well if the situation doesn’t get fixed. Weber, a volunteer performer for 19 years with the CSO, said when the musicians received the email they weren’t sure how to take it.

“Initially people weren’t sure if this was Dr. Bowden’s choice or the board’s choice,” Weber said. “When they found out, this really wasn’t Dr. Bowden’s choosing, some were really shocked and upset.”

Weber said they learned the board only talked to six musicians from the 85-member orchestra prior to the decision. Weber said she didn’t think that was a representative sample of all the musicians.

CSO board chair Brad Grabow stated that the board “made a very difficult and well-thought out decision with the long-term advancement of the Carmel Symphony Orchestra as our number one priority. Nothing has changed in regard to our commitment to the orchestra.”

“I felt that wasn’t a lot of input for a group that was driven by us,” Weber said. “Hopefully, they will reconsider how they made the decision of relieving Dr. Bowden in the middle of the season when he’s already programmed the entire season. We don’t think that is in the best interest of our organization, our audience and our performance ability.”

Weber said many understood changing a director can be a personnel issue, but the board doesn’t understand the impact during the season.

“As a contract employee, Dr. Bowden’s contract was (reviewed every three years) with an option to renew that contract,” Grabow stated. “Again, because this is a personnel issue, we are legally bound not to discuss the specific language of that contract. However, we thank David for these years of musical growth under his artistic leadership. We look forward to a national search process for our next music director who will debut with us at the start of our 2017-18 season.”

Ed Staubach, who serves as principal clarinet player and a stage manager, said Bowden is saddened, but is not encouraging any musicians to intervene on his behalf.

When reached, Bowden said, “I loved working with the musicians of the Carmel Symphony Orchestra. I believe I’ve given them my very best for 17 years and I will really miss them.”

Bowden, 62, said that’s the only statement he wants to make at this time. Bowden, who has a doctorate from Indiana University and lives in Bloomington, is also the music director for the Columbus (Ind.) Philharmonic and Chorus and Terre Haute Symphony Orchestra.

“We were told (the board) wanted a different direction and to stay contemporary in consideration of audience preferences but it didn’t seem like they even surveyed the audience to find out,” Weber said. “Was the audience all of sudden unhappy with Dr. Bowden? None of us seemed to have that impression.”

Alan Davis, CSO president and CEO, said the orchestra will use candidates or guest conductors depending on schedules. Weber said she and the others question whether that is a feasible option. There is one more concert in 2016 (Dec. 10) during the calendar year so Weber said that would even be a more logical replacement time. There are four more after that in the 2016-17 season.

At the time of announcement, Davis said: “During his tenure as music director, the orchestra grew from a small community orchestra that was playing in high school auditoriums and churches to the wonderful orchestra, which is resident orchestra in the Palladium. That’s a huge leap forward for the symphony.”

Davis said the board has begun the process of a search committee to perform a national search.

“We want to identify the best musical director to take the orchestra into the next 40 years,” Davis said.

Staubach said he counts himself among those that will leave when Bowden leaves.

“I’m afraid a lot (of the volunteer musicians) will go elsewhere and that could be disastrous finically and well as musically for the orchestra,” Staubach said. “I love playing for Carmel Symphony and playing at the Palladium. I’ve retired and it is a two-hour drive (from Owen County) for rehearsal. I make the drive because David is there. He’s got integrity. He so well prepared and it’s a pleasure to play for him.”

CSO volunteers Laura Richardson (second clarinet) and her husband, Bill Richardson (French horn), said they would plan to leave when Bowden does as well. They also own Mallow Run Winery in Bargersville, which hired the CSO to do a concert for nine years, including one on June 18.

“The information they were given may not be complete,” Laura said. “We’ve requested through our liaison to the board an opportunity to meet with the board that represents other points of views. We feel it wasn’t an inclusive representation.”

Grabow stated that the board is open to listening to the concerns of the musician.

“However, we stand firmly by our decision,” he stated.

Laura said Bowden didn’t ask the musicians to contact the board.

“He did say that if the board did reconsider its decision in light of the love and support he received from the musicians he would gladly return,” Laura said.