You are at:Home»Current in Zionsville»Zionsville drummers reflect on playing for Dalai Lama 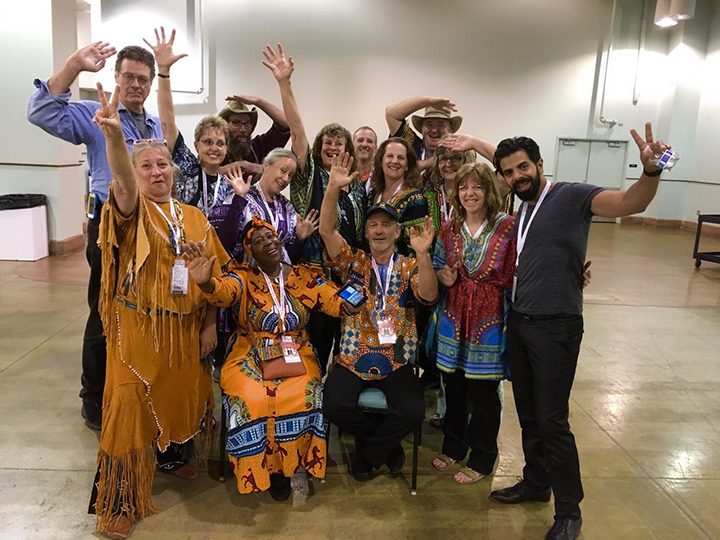 When the Dalai Lama recently visited Indianapolis, a group of drummers from Zionsville set the tone for the event performing before a crowd of more than 6,000 people.

“Never in our wildest dreams would any of us have imagined that we would have had a chance to perform at one of his events,” said Sally Childs-Helton, a member of the Zionsville Drum Troupe that began about two years ago. “It was one of those things you couldn’t even imagine to put on your bucket list.”

The opportunity came about through an acquaintance of Childs-Helton who was part of a committee for the Dalai Lama’s appearance in Indianapolis on June 25. She had heard the troupe play and sent an email message to Childs-Helton. “It said, ‘How would your drum group like to play for the Dalai Lama?,’ and my jaw dropped,” she said.

The group was joined by several other drummers from the Indianapolis area representing other cultures, so they kept it simple and meditative beginning the program with a heartbeat rhythm.

“It’s in the rhythm of every culture,” Childs-Helton said. “The idea was for us to start together out of a heartbeat and then individually or together start embroidering on that.”

The drummers recognized the importance of setting the tone and atmosphere for the afternoon.

Because of security concerns at Indiana Farmers Coliseum, the Dalai Lama was brought into the building after the drummers and others performed, but the drummers were still able to hear him speak.

“It was really quite an experience to be in the presence of someone who literally embodies compassion,” Childs-Helton said. “There’s a palpable energy surrounding the man.”

The Zionsville Drum Troupe practices the second Sunday of each month at the SullivanMunce Cultural Center and welcomes others to join their drum circle from 6 to 7 p.m.