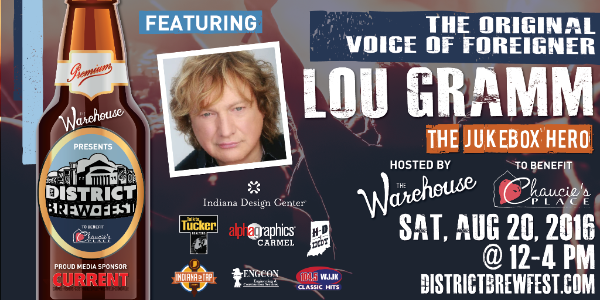 Lou Gramm aims to be a crowd-pleaser.

Gramm, whose billing is The Original Voice of Foreigner, will play a heavy mix of Foreigner and some of his solo hits at District Brewfest, which runs from noon to 4 p.m. Aug. 20 outside of The Warehouse, 254 1st Ave. SW, Carmel. Indianapolis musician Sam Law will open for Gramm.

“That’s the life and breath of our shows,” Gramm said.  “We obviously know people want to hear the Foreigner hits and the hits from our solo albums and honestly that can fill up a night.”

Gramm co-wrote most of Foreigner’s biggest hits with Mick Jones. Gramm left Foreigner for his solo career in 1990 but returned in 1992. He left again in 2003. This year marks the band’s 40th anniversary. Foreigner is still touring but Jones often doesn’t perform because of health-related issues. Both Jones and Gramm talked about the possibility of reuniting this year to celebrate the anniversary.

“There were talks about it but they never reached fruition,” Gramm said. “I guess we’re going to let it pass it quietly. It’s certainly is a good milestone in someone’s career to have 40 years from our first album, which was a pretty good hit for us. It definitely something to celebrate, but I think people’s schedules are a little too crazy.”

Two of Gramm’s favorites are “Jukebox Hero” and “Urgent.”

“I like playing all of them, but in an hour-and-a-half set, those two songs particularly stick out to me,” Gramm said.

“The whole band is really from Rochester,” Gramm said. “They’re great guys and good people to hang out with — no bad habits. We go out and have a lot of fun.”

“It’s civilized and you can have a normal life through the week,” Gramm said.

The general admission ticket, including beer samples, is $55. Wine, designated driver and VIP tickets also are on sale. Twenty percent of the proceeds from District Brewfest will benefit Chaucie’s Place, a Hamilton County child advocacy organization. For more, visit districtbrewfest.com.