You are at:Home»Current in Zionsville»Pearson Automotive Tennis Club celebrates groundbreaking 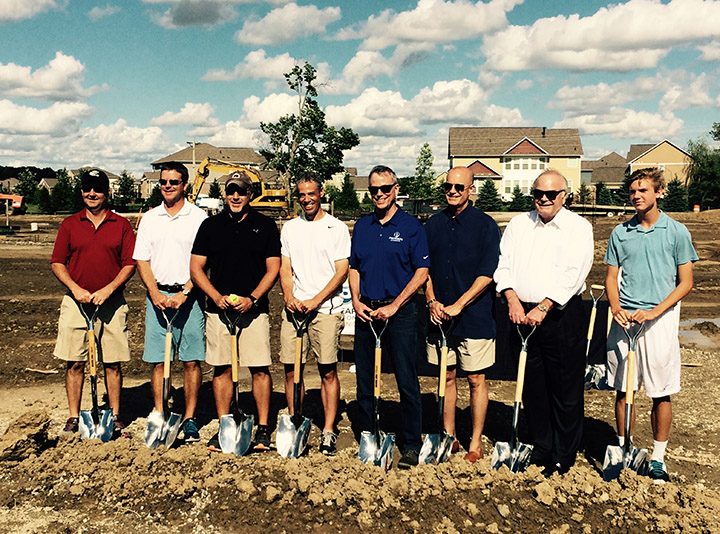 John Pearson has been an enthusiastic supporter of tennis in the Indianapolis area for years.

An avid player, he has sponsored the Pearson Ford Open tournament. His sons, John and Will, were key players for state championship high school teams for Park Tudor.

So, lending his name to a new tennis center in Zionsville just made sense for the Indianapolis resident.

“We’ve been delighted to try to grow tennis in the community,” Pearson said. “They approached me, and I thought it would be the perfect marriage to try to put our name on the facility. We’ve been intricately involved in Zionsville for now almost 60 years (his father’s first dealership was on Cedar Street in Zionsville in 1960). We’ve always kept our Zionsville address (Pearson Ford, 10650 N. Michigan Rd.) and phone number. I think to help the community with a not-for-profit center to help grow tennis fits perfectly with our history.”

Pearson was part of the groundbreaking ceremony Aug. 21 for the Pearson Automotive Tennis Club, 4560 S. 875 E., adjacent to the Zionsville Community High School sports complex. The center is expected to open in December.

The center, modeled after one in Fort Wayne, will have eight courts and a two-sided viewing deck.

Derek Mandel, the Zionsville Middle School boys tennis coach, David Hunt and Mike Marine began discussing the idea to start a center nearly four years ago. They are among a nine-member board.

“There are so many players coming out for the teams,” Mandel said. “This facility will allow them to conveniently access clinics, tournaments and lessons and grow to be better players.”

Team Witsken, run by long-time tennis pro Rick Witsken, will operate the tennis program at the facility. Team Witsken runs its outdoor program at Zionsville courts but has been using two indoor courts at Pickwick Farms Apartments in Indianapolis this winter.

“It’s fun to see the west side of Hamilton County, Boone County and Hendricks County have an opportunity to come to a nice, new facility they are really proud of,” Witsken said. “We’re going to hire pros that are passionate about their job. I’m definitely going to commit any ounce of energy I have to make sure this is super successful.”