You are at:Home»Night & Day»Interim CEO of The Center for the Performing Arts Jeff McDermott plans for the future 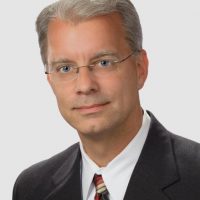 President Ronald Reagan had a plaque on his desk that read: “There’s no limit to what you can accomplish if you don’t care who gets the credit.” Jeff McDermott, partner at the law firm of Krieg DeVault LLP and newly-appointed interim CEO of The Center for the Performing Arts, said he manages with that motto in mind.

McDermott describes himself as “hands on, but not a micromanager.” In his professional life, he’s been a leader, serving on his firm’s three-member executive committee, and serves as the executive partner to its Hamilton County offices. He’s on numerous nonprofit boards and has been on the board at the Center since 2010, the year prior to its opening. He’s chair of the Great American Songbook Foundation, a nonprofit founded by singer and artistic director for the Center Michael Feinstein.

McDermott is taking over for Tania Castroverde Moskalenko, who has been CEO of the Center since June 2012 and has left to accept a job as CEO of the Auditorium Theatre of Roosevelt University in Chicago. McDermott said Moskalenko has left the Center in great shape.

“Well, I think we’re in a great position financially,” he said. “We’ve got a great infrastructure and we’ve got great staff. When we brought Tania in, we were a much less mature organization. We had been through a single season. It was a challenging time. She built a great staff here. We’ve had surpluses. There’s a great foundation. Is there ever a good time to have a transition? Maybe not, but we are left with a solid foundation.”

“I think it will be a sought-after position because it has great people and a strong financial footing,” he said.

If the permanent CEO is selected soon, it could mean that the Center will have had five leaders in the past six years, including interim leaders. McDermott said that’s not a concern.

“I think we are kidding ourselves to think someone can come in do a great job and not be noticed by others who are recruiting for jobs,” he said. “When great people do great work it’s hard to keep it a secret.”

One of the major goals for McDermott and the next CEO will be the next stage in the strategic vision of the Great American Songbook Foundation.

The Great American Songbook is a collection of classic songs, written by the likes of Cole Porter, George Gershwin and others. The foundation itself has archival storage, an exhibit space located inside The Palladium and the annual vocal competition at The Palladium called the Songbook Academy.

McDermott said the ultimate goal has always been to build a freestanding museum, which could be built next to The Palladium.

“Someone was going to build this museum somewhere, so why not Carmel?” he said.

McDermott said the museum can be an educational tool, tourist attraction and amenity for residents. McDermott said he understands that some people are concerned about how a museum could cost millions of dollars, but he said he’s confident that the boards of the Center and the Foundation won’t proceed with any plans that aren’t financially responsible. He said there are lots of people nationally who would like to contribute to such a museum and that its donors could be different from the Center’s current donor base.

“We don’t want to cannibalize our donors, but they are both different so that doesn’t happen as much,” he said.

While the Center and the Foundation are separate 501(c)3s, he said there’s overlap on the boards and staff and so it’s all part of the same mission.

“We’d like it to look and feel as seamless as can be,” he said.

Job: Partner at Krieg DeVault LLP. He started at the firm in 1986.

Wife: Britt McDermott, who is CEO of Urology of Indiana LLC

Children: Three daughters and one son

Education: Purdue for undergraduate and Notre Dame for law school

Arts background: “My family and I joke that I don’t have an artistic bone in my body. I can’t perform so I support. I can sing out of tune and I played the trumpet as a kid, but I have a love of music.”

Favorite seat in The Palladium: “We sit on the aisle in row E and I like it. It’s easy to get in and out.”