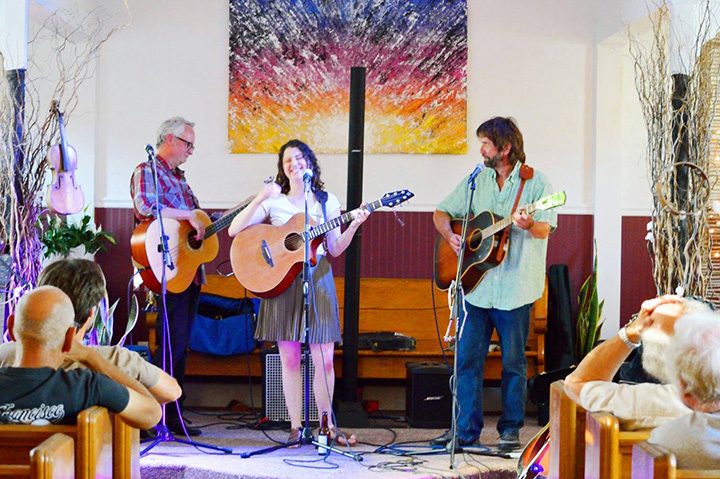 The Noble Roots band may have roots in Noblesville, but the group is branching out to perform across Indiana.

The band’s formation began by happenstance.

“One of my bandmates, John (Gilmore), was also my guitar teacher. So him and I started singing together after teaching me guitar for a while,” said Kelli Yates, one of Noble Roots’ guitarists and singers.

“(Gilmore) thought we should round out our sound,” Yates said. “So he brought in Gary (Wasson), who plays bass, and he and John have been playing in bands together for 20 years. Gary came three years ago.”

Coming up with a name for the band was the next challenge.

“We batted around a bunch with, ‘Kelli Yates, John Gilmore, Gary Wasson,’ but that was too much to fit on a poster,” Gilmore said. “Noble came from Noblesville, and Roots came from the heritage of music. We are rooted in Noblesville.”

“We call it Americana, because it’s a mix,” Yates said. “We do some folk, some bluegrass stuff and some modern. We do some originals and some covers.”

The band frequently plays at a Noblesville restaurant and an Indianapolis brewery.

“We play (the) Cooper Still and the Barley Island,” Gilmore said.

Yates enjoys playing any location that has a receptive audience.

“Any place that has a crowd that’s into it (the music) is better than anything else,” Yates said. “It could be a tiny cramped bar, but if people are into it, that’s better than anything. I like playing at a place called Flatwater a lot. It’s a restaurant in Broad Ripple.”