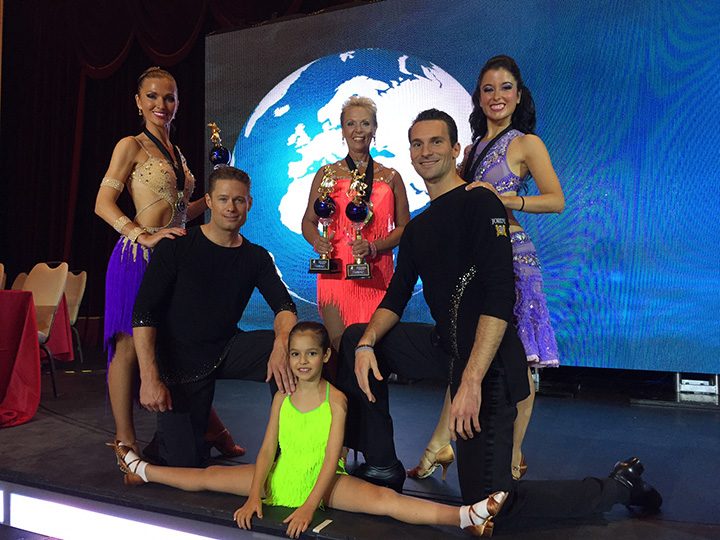 For Carmel Fred Astaire Dance Studios students, it was more skill than luck on their side at the recent Fred Astaire World Championships at the Bellagio in Las Vegas.

“We have a very highly successful studio here for competitive dancers,” said Dan Rutherford, who owns the Carmel Fred Astaire Studio with his wife, Nicole Carroll-Rutherford. “But typically speaking one studio doesn’t come home with every champion, and that’s what we did.”

Approximately 15,000 competitors from Fred Astaire Studios all over the world were at the competition in late July, Rutherford said.

The categories are Juniors, A, B, C age divisions for amateur dancers and Carmel dancers won in all four. Nataliya Avila, who lives in Geist area, won the B division (ages 35-55) rhythm crown. Her daughter Gabriella Avila, 8, captured the junior Latin championship.  Brittany Overbeck, an Indianapolis resident who owns Blue House Bridal in Carmel, won the A Division (ages 16-34) rhythm title. Vicki Barbera, Zionsville, was the champion in the C Division (55 and older) rhythm and Latin classes.

“I won in 2013 (at the World Championships in Puerto Rico) so it was nice to have a comeback,” said Barbera, who been at Astaire student for eight-plus years.

Jonah Schneider and Todd Travis were the professionals. Schneider was named the top Latin teacher at the competition.

“We’re a nationally-recognized school of dance with some of the top dancers in the country and we have some of the top teachers in the country,” said Rutherford, who has owned an Astaire studio for 27 years, the last three in Carmel. “My wife and I are former world professional rhythm champions. So we’re trained in this competitive ballroom dancing. So we train our staff and students to be the best they can be. They don’t have to compete, but if you’re going to pay for ballroom dance lessons, you might well be the best you can be.”

The students are now preparing for the U.S. Dance Championships, which start Sept. 5 in Orlando.