You are at:Home»Current in Westfield»Obituary: William F. McVey 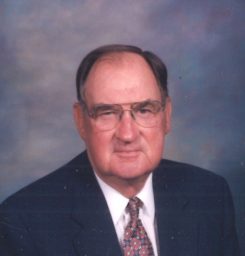 Bill was retired from Stony Creek Stone Company in Noblesville where he had worked for more than 25 years. He proudly served his country in the U.S. Army and was a World War II veteran, having received both a Bronze Star and Victory Medal. He was a member of First Christian Church in Noblesville, where he served as a Deacon. After retirement, Bill served as a volunteer transporter at Riverview Hospital and was also employed with Noblesville schools as a bus driver. An avid golfer, Bill could often be found at Forest Park and Fox Prairie golf courses.

In addition to his parents, he was preceded in death by his wife of 69 years, Frances McVey, who died July 25, 2016; an infant son, Timothy McVey; a brother, James McVey; and two sisters, Mary Palmer and Helen Hanner.