Thirteen-year-old Ethan Holder recently returned from New York City. However, his trip wasn’t a typical, sightseeing vacation but a yearlong performance in “The King and I” on Broadway. 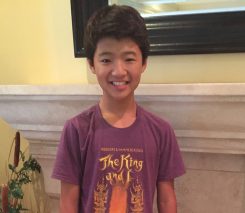 Ethan Holder stayed in New York for a year performing in “The King and I” on Broadway. (Photo by Anna Skinner)

“I moved to (New York) in late January 2015, and we started rehearsals and they were two months or so,” Holder said. “Starting mid-March we had previews and then April 16 was our opening, and I was in it for a whole year and then I came back in February.”

Holder was in the kids’ ensemble portraying one of the king’s 13 kids. Overall, there was a series of three auditions for “The King and I,” and although Holder has performed with the Indiana Repertory Theatre, Footlite Musicals, Civic Theatre in Carmel, Beef and Boards and the Indiana Ballet Conservatory, he had never performed on Broadway.

Holder finished up his school year at St. Richard’s Episcopal in Indianapolis online, and then for the year following completed homeschool curriculum while performing in eight shows a week and completing dance and voice lessons.

“I think it was a really good opportunity to finally be on Broadway,” he said. “I’ve been in ‘The King and I’ before (locally) and really liked the show. I learned more about the community and acting and the people. (Being on Broadway_ teaches you more about how to be more coherent and organized on stage, and it increases your acting skills by observing the adults.”