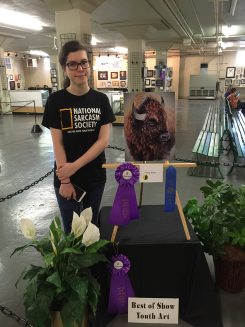 Mary Kane with her award-winning painting of a bison. (Submitted photo)

Mary Kane had no idea the Indiana State Fair was featuring decorated bison as part of a legacy project called Bison-tennial by the Indiana Association of United Ways and the Bicentennial Commission in its Arts Building.

It just so happened Kane’s art project was a painting of a bison. When she got to the State Fair, she learned about the exhibit for the first time.

“It was just a happy coincidence,” she said.

Kane, a Carmel High School senior, captured the Star Fair’s high school division of Best in Show for her bison.

Kane said she had always wanted to do a piece on a bison. She decided to enter it because her parents, Larry and Connie Kane, really liked the piece.

“They are really big into Western art,” Kane said. “I personally think bison are very majestic animals, and I thought that it was a good piece of mine.”

Kane, 18, said she usually paints or draws people and animals.

“But I’m trying to get more into landscapes, too,” Kane said.

Kane is planning to apply to art schools, but hasn’t decided where she wants to go yet.

“I’m hoping to get into the commercial field of art with movies, video games and animation,” Kane said.

Drawing and painted has always been a love.

“Ever since I can remember, I liked drawing,” Kane said. “I didn’t start doing it as often or as seriously until sixth grade. Ever since then, I’ve been spending most of my free time doing art.”

Kane also earned second place in the graphic design (forest scene) and third place in painting (owl and mouse). This was the third time she entered the State Fair competition.

In the 2015 Carmel International Arts Festival, she captured best in mixed media in the high school division. In 2014, she received best in drawing in the same competition.