The Zionsville Rotary Club members are optimistic they have found an annual fundraising event. 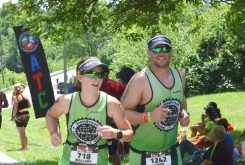 The inaugural Zionsville Sprint Triathlon will begin at 8 a.m. Sept. 18. The race will begin and end at Zionsville Community High School and consist of a 200-yard swim, 11-mile bike race and 5K trail run.

“One of our Rotary members (Dave Edwards) brought it to the club’s attention as a fundraising idea,” Rotary Club member Roger Oberweiser said. “In the past, we’ve hired speakers to come in. We’ve had Brad Stevens and Dan Dakich come in. Trying to coordinate those schedules is tough. We thought if we had a signature event we could hold every year at the same time, it would be something we could set our watches to and knew it would be happening every year.”

After forming a nine-person committee, Oberweiser became the event director of the USA Triathlon-sanctioned event. Oberweiser said there are more than 50 participants registered so far and the goal is to have 75 to 100.

Racemakers Productions helped with the initial planning and will be in charge of keeping times.

Loren Long, co-founder and president of the Zionsville Triathlon and Cycling Team, has provided guidance, as well.

“I helped with the course and gave them tips here and there on what to do and what to expect,” Long said.

Long said his team members are pleased to have an event in Zionsville.

“It’s one of those things we’ve been talking about for awhile, and it’s good to get it on the schedule,” said Long, who will compete with his wife, Mallory. “A lot of us are excited to have it our own backyard.”

Oberweiser said the club uses funds to help the various causes it is involved with in the Zionsville community.

Participants must be 15 by Dec. 31 to enter. There are several different age groups for male or female competitors. The price is $70 until Sept. 1 and $75 until Sept. 15. For more, visit ZionsvilleTriathlon.com for more information.