You are at:Home»Night & Day»Entertainment News»‘Menopause, the Musical’ to open at Beef & Boards Dinner Theatre Aug. 25 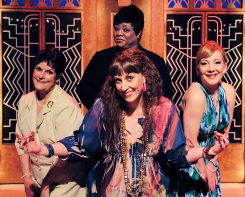 In “Menopause, the Musical,” four women meet by chance at a department store lingerie sale and proceed to make fun of their irritating hot flashes, forgetfulness, mood swings, wrinkles, night sweats, sex drives and chocolate binges. A sisterhood is created among this diverse group of women – and the audience.

“Chemistry is so imporant,” said New Yorker Seth Greenleaf, who has directed more than 100 productions of the musical. “The chemistry is written into the show and the characters, but it’s always better when played by performers who really bond and know how to let the audience in on that bonding.

“We think of the audience as the fifth girlfriend, and when the actors are having fun, the audience can feel it.”

In fact, Greenleaf says audience reaction is his favorite part.

“There are very few experiences in the theater as particular and wild as audiences reacting to this show,” said Greenleaf, a Tony Award-winning producer who works mostly on Broadway. “There are so many tears of laughter in it. I call it the biggest little show in theater.”

Opening Aug. 25 at the Beef & Boards Dinner Theatre for 44 performances through Oct. 2, the show features four veteran actresses making their debuts at the theater: Teri Adams as the Iowa housewife; Donna J. Huntley as the professional woman; Ingrid Cole as the Earth mother; and Paula Kline-Messner as the soap star.

“This is one of our most veteran casts; experience is their strength,” said Greenleaf. “They have performed all over the country with many actors, so they bring little bits from all of those experiences with them. They know how to read and pick up an audience, and where all the peaks and punch lines are supposed to be.

“I have a ton of confidence as a director in this situation. As long as that Teri doesn’t bite any audience members, we’re good.”