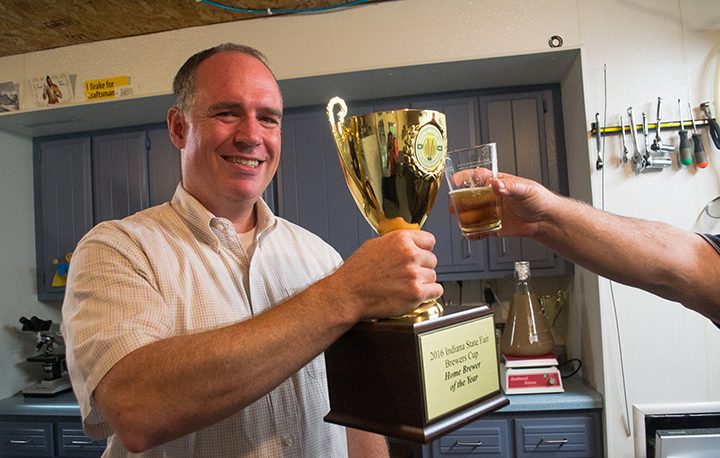 Tom Wallbank has been brewing his own beer since the mid-1990s.

“My girlfriend, now wife, bought me a brew kit,” Wallbank said. “It’s nice because if she thinks I’m spending a little too much time on it, I can blame it on her.”

Does she regret it now?

Fortunately, his wife, Belinda, shares his love of beer, and the Zionsville resident has mastered the craft of homebrewing.

Wallbank earned three first places in the 2016 competition in the light lager, Belgian sour beer and Belgian strong ale. He placed third in the Czech dark lager. A point system helped him win the overall title.

A national judge, Wallbank said the competition is one of the better-run organizations in the Midwest.

Frequently, he is asked if he plans to start his own brewery.

“To me, it seems like a good way to ruin a perfectly good hobby,” Wallbank said. “It’s a small business, so you are dealing with the public and all the headaches that come with it. Being a brewer, setting aside ownership, isn’t a very glamorous job. In a lot of ways you’re a glorified janitor. It’s a fun industry. But there’s a whole lot of cleaning and sanitizing that goes along with it.”

Wallbank is a member of Foam Blowers of Indiana, which collectively won the state’s Homebrew Club of the Year.

“There is a social meeting once a month at Triton Brewing,” Wallbank said. “We supplement that with a pot luck pitch-in. Sometimes we’ll have more technical meetings.”

Wallbank and his wife took a trip to Belgium to visit Trappist monasteries, several of which have breweries.

“The monks raise money for their charitable activities through beer,” Wallbank said. “When you taste them over there, they are fresh from the source.”

Some brewers focus on a single style.

“I have more of a shotgun approach,” Wallbank said. “I probably focus on German lagers and English ales the most, because those are the ones that don’t travel as well. It doesn’t make sense for me to brew an IPA (India pale ale) when you can go to a store or breweries around here and get a very nice IPA.”

Belgium sours are another favorite.

Wallbank said it takes approximately five hours to brew a batch of beer.

“My (two) kids are active in soccer, and both play a bass violin,” Wallbank said. “They’re both in scouts. So while many of my friends will brew on weekends, I’m usually doing on a Wednesday night when there is not as much going on.”

Wallbank usually brews more from December through March when his children have less activities.

Wallbank said he has been brewing several different recipes for years, often tweaking the recipes.

There are several reasons he enjoys the hobby.

“You have a lot of art in creating recipes,” Wallbank said. “You’ve got a lot of science. When I grow my yeast I’m counting them on the microscope, making sure I have the right number. So there’s science and a fair amount of engineering. I like putting together all this equipment and getting the controllers to talk. I’m an engineer by training and don’t get to use all that hands-on mechanical stuff at work, so this is sort of an outlet.” 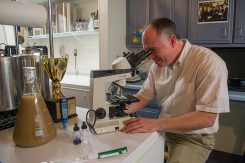 Personal: Has two children, Camilla, 13, an eighth grader; and Thomas, 11, a sixth grader at Zionsville West Middle School. Wallbank was born in California but moved to Indiana when he was 15. Graduated from West Noble High School and has a degree in industrial engineering from Purdue. Works for Eli Lilly Co. Wife, Belinda, is a nurse educator at Methodist Hospital.

Favorite Beer: “I believe there is a time and a place for every beer. Out at the Indy 500 on a hot day, you want something fairly light and not too high in alcohol. My favorite depends on time of year, where I am and what I’m eating. I also have a sub-goal of never drinking the same beer twice as long as it doesn’t mean skipping a beer.”