You are at:Home»Current in Westfield»Westfield Woman’s Club awards scholarship, searches for members 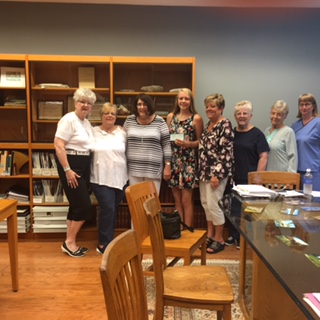 The Westfield Woman’s Club originated in 1895 to enrich literacy and the social and civic welfare of the community, and for the last decade, the club has been doing so by providing scholarships to high school women.

“Our big thing is to raise enough money to give a $500 scholarship each year,” said Sheryl Sollars, a member and the director of the Westfield Washington Public Library, where the women meet. “We try to find different ways to raise money. This year we did a garage sale.”

The scholarship was awarded to Anna Hopkins, who previously worked as a page at the library. Three women applied for the scholarship. Previously, the club sold walnuts and pecans to raise money for the scholarships but had to change fundraising efforts this year due to the company providing the nuts going out of business.

“The three were all very well-qualified, and we had a hard time choosing, but Anna has been in 4-H for over 10 years and her leadership skills were great,” Sollars said.

In addition to providing scholarships, the Westfield Woman’s Club raises money for the library, Open Doors and other nonprofits. Before the parks and recreation department took over, the club maintained Old Friends Cemetery Park. Currently, there are only nine members, and Sollars said the club is searching for more.

“Basically, we are looking for new members to strengthen the club and get it back to where it used to be,” she said. “Each of our meetings, we have a speaker talking about something going on in the community, or something that would be of interest to the ladies in the group.”