You are at:Home»Current in Fishers»Yanez launches Indy Spanish Academy year after A Spanish Café

A Spanish Café opened a year ago, and after seeing its success, creator Fernando Yanez recently launched Indy Spanish Academy, an after-school program set for ages kindergarten through fifth grade. A Spanish Café is only for adults. 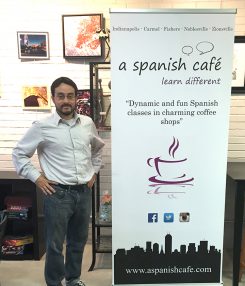 “We wanted to start Indy Spanish Academy to offer an after-school Spanish program for kids kindergarten through fifth grade and do it in different locations in the area,” said Yanez, a teacher at Hamilton Southeastern High School.  “It’ll be an immersion program to teach kids and give them that first contact with the language.”

The lessons are given at Geist Christian Church, 12756 Promise Rd., but Yanez has plans to bring it to Carmel, as well. Students are taught basic vocabulary, such as colors and animals. Yanez hopes to bring a Saturday morning class in for students through middle school in the future.

“Spanish is the language growing the most in the United States and is here and will be in the future and the kids want to take it in middle school and high school, and it will be very productive to start early,” he said. “The community has been very supportive. The number one thing that parents want is foreign language in Fishers.”

Classes meet twice a weekthroughout the school semester. Fees lower as the semester progresses. Yanez said he plans to open his second location in Carmel this winter at Faith Apostolic Church.

“Most students are from Fishers and Carmel, but everybody is welcome,” Yanez said.