On Sept. 19, the Fishers City Council met at city hall to approve multiple ordinances and hear an introduction of the 2017 city budget. The next city council meeting is scheduled for 7 p.m. Oct. 17 at city hall, 1 Municipal Dr.

What happened: Council approved a petition to amend the text of the Britton Falls Planned Unit Development Piper Glen Subdivision to clarify that floor plans of all residents should offer three-car garages, as well as modified garage door requirements.

What it means: Many council members were concerned about the subdivision not meeting requirements of the comprehensive plan, but others argued it would be unfair to the petitioner to change the rules this far into the proposal. The issue of adequate numbers of stub streets arose, but overall, the council approved the proposal, 5-2, with Brad DeReamer and Rich Block voting against. 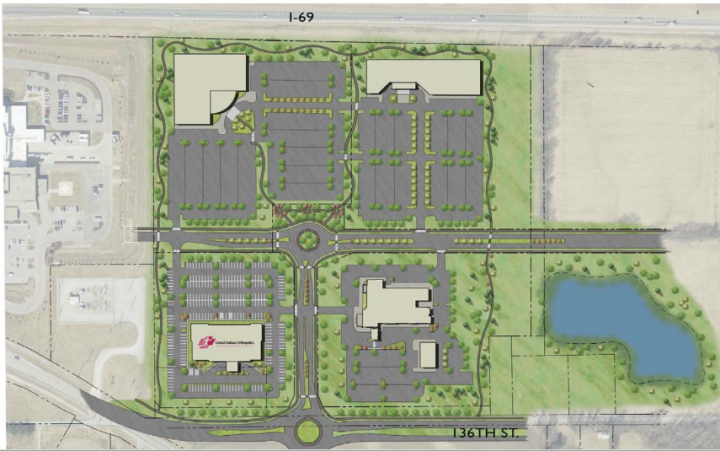 The MedTech PUD is located at the I-69 and 136th Street corridor. (Submitted photo)

What happened: The council approved a request to rezone the MedTech PUD on approximately 37 acres at 14000 E. 136th St.

What it means: Central Indiana Orthopedics proposed to build a 50,000-square-foot medical facility in the MedTech PUD.

What happened: The 2017 budget was introduced to city council.

What it means: Mayor Scott Fadness introduced the 2017 budget to the council with plans to increase public safety as well as focus on roads. Fadness informed the council that Fishers has a AAA bond rating, the only city in Indiana to achieve that rating. Fadness expects a 1.5- to 2-cent tax increase per $100 of assessed property. The budget is expected to be approved by Oct. 17.

What happened: The council approved a $25-wheel tax to be issued in January 2018.

What it means: Beginning in January 2018, drivers with a registered car in Fishers will pay a $25-wheel tax with their registration fees. Fadness said he expects this to bring more than $2 million to the community per year. He explained that roads need to be resurfaced every 15-20 years, but at Fishers’ current rate, they won’t be resurfaced for 70 years. The council approved the tax unanimously, despite mention of them receiving political backlash.

“The quality of life in Fishers is why people move here,” DeReamer said. “To maintain that quality of life expected requires that we maintain our roads. None of us up here want to raise taxes, but we don’t have any choice. It’s really a simple thing to vote for. Politically, we will take a lot of hit, but we need it.”

Member Todd Zimmerman said he has heard that Hamilton Southeastern school buses are unable to pass each other on the roads due to narrow roads.

“I’m not usually in favor of any kind of tax increase, but this is what I consider vital to the safety in the community and the continued growth in the community,” he said.