You are at:Home»Current in Carmel»Carmel Community»Carmel Clay Schools looks to add courses for 2017-2018 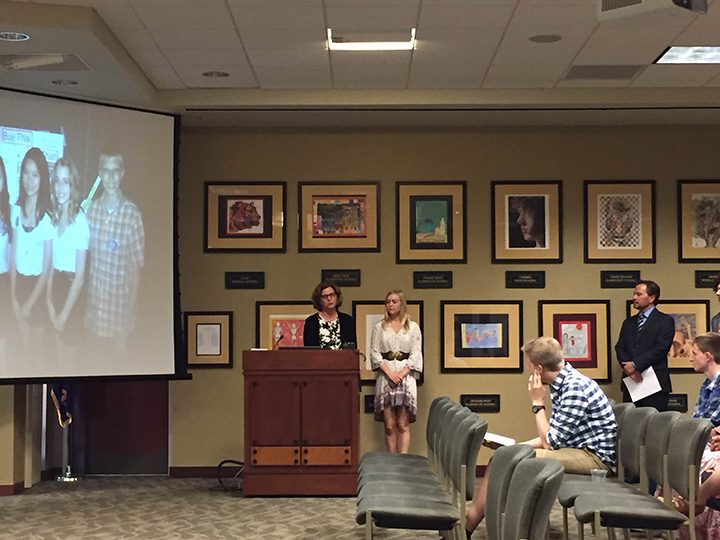 Kay Vazquez, left, and Cecilia Germann at the school board meeting. (Photo by Nick Poust)

The Carmel Clay School Board met Sept. 26 to discuss the 2017 budget, additions to the 2017-2018 curriculum and to honor a high school student and teacher.

What happened: Kay Vasquez, a Spanish teacher at Carmel High School, awarded one of her students, Cecilia Germann, with the 2016 Indiana High School Student of Spanish Award. Vazquez was announced as the recipient of the 2016 Exceptional Teaching Impact and Motivation Student Voice Award for Outstanding Spanish Teacher. Fellow CHS teacher Andrea Yocum lauded Vazquez for her ability to tie in her personal travels across the globe into her curriculum. “We often see her bring in stories of living in Germany with her family,” Yocum said. “In traveling with her family, all the multiculturalism that she brings to the classroom is fantastic.”

What’s next: The Indiana Chapter of the American Association of Teachers of Spanish and Portuguese will present Vasquez with the award Nov. 5.

What happened: Assistant Supt. Amy Dudley presented the 2017-18 course changes for Carmel High School. A single course will be added to each of the social studies, history, family and consumer science, business, art and world language course lists. Dudley also introduced a waiver that, if approved by the state, would award Carmel High School students with one credit for their completion of Sports Medicine 2. Currently, students are not eligible to receive a credit for this course.

What’s next: This initial request in regards to Sports Medicine 2 will be considered by the board for approval. If approved, the waiver will go before the state of Indiana.

What happened: Associate Supt. Roger McMichael requested additional appropriations in the general fund and referendum fund. This is due in part to two delays. The state was late in sending the grant money tied to the annual performance grant, normally received in November 2015 but paid in early 2016, and the teachers were given their retroactive performance bonuses late, which were handed out in February.

What it means: Because of those delays and because they expect to receive this year’s grant funds this November, Carmel Clay Schools will have to pay two years’ worth of performance grants at one time. McMichael asked the board permission to advertise for a hearing regarding the appropriations.

What’s next: The CCS board passed a motion to advertise for this public hearing, which will take place Oct. 24.