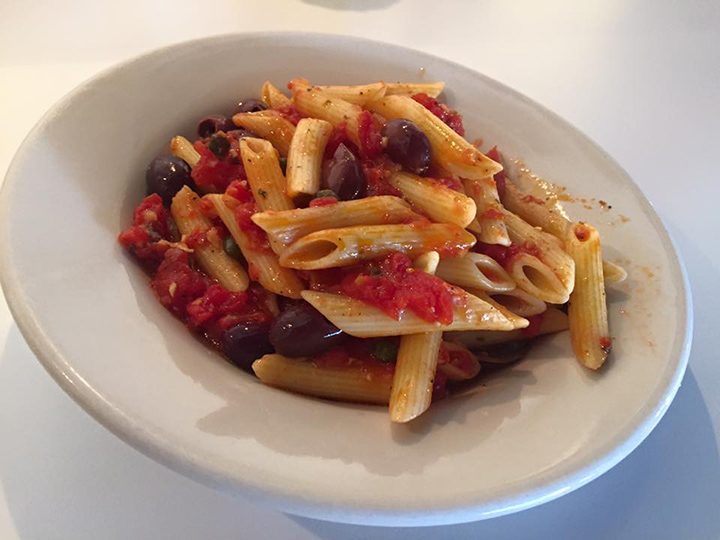 This is a great option for vegetarians at Donatello’s Italian Restaurant. It does have anchovies but can be left out if you want. This is a seaside pasta which literally means, “in the style of a prostitute.” Why is that? Well, there are various accounts of the origin, but the popular theory is that in the 1950s a chef was serving his customers and barely had any ingredients left in the pantry. He threw together what he had  — some tomatoes, olives, and capers — and invented a pasta meant for a peasant, because it’s made with leftover ingredients. Hence, the colorful name.

Notes: I know some people don’t like anchovies but they should melt away and you won’t really know they’re  there except they add a nice salty, seaside flavor to this dish. Also, there’s a big difference between types of olives and we recommend pitted kalamata for this dish.

Put on a medium pot of water to boil.

Drain the juice from the tomatoes and place them in a mixing bowl. Put on a latex glove and squeeze the whole peeled tomatoes until they are small bits but still somewhat chunky.

Grab a medium-sized skillet and heat it to medium heat. Pour olive oil in the pan and let it warm up without burning or bubbling up.

Add garlic (you can add more or less based on preference)  but make sure it doesn’t brown or burn. Burned  garlic will ruin the dish and you’ll need to start over. Use a low heat and be sure to stir the garlic so it doesn’t stick. The finer you chop the garlic the more it’s likely to burn, but finely chopped garlic also helps spread the flavor throughout the dish, so just keep an eye on that.

You’ll also want to add some anchovy. This should melt into the olive oil instead of being one big piece. You can break it up and stir it with your cooking fork or chop it ahead of time. Some people like using anchovy paste but we think whole anchovies are better.

Make sure you don’t add too much olive oil. You’ll be able to tell when you add your tomatoes.

Once the garlic is cooked but not brown, add the tomatoes. You’ll hear them sizzle so make sure the heat isn’t too high.

Your goal is to have the olive oil and tomatoes to mix together seamlessly. Heat and stirring should accomplish that. If there appears to be too much olive oil, you can drain some off at this point.

Once the sauce is almost done — you can tell the tomatoes are warm and soft without being mushy — you can add your capers, oregano and olives. You want the olives slightly cooked so they are warm and soft, but they don’t take as long as the rest so you add them at the end.

While making the sauce, you’ll be cooking the pasta in boiling water. Basically follow whatever time it says on the package if you bought pre-made pasta, but generally it should be 3 to 5 minutes.

Add the fresh cooked pasta to the sauce while it’s still hot and it will absorb some of the sauce before you scoop it into a bowl.