You are at:Home»Current in Carmel»Carmel man doesn’t let stroke stop passion for photography 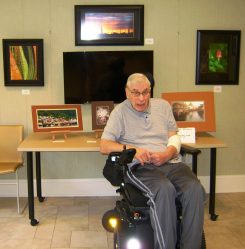 Michael LaMaster displays some of his favorite photographs. (Submitted photo)

For 13 years Michael LaMaster’s favorite hobby was photographing nature. Through the years he captured thousands of beautiful images from his  perspective behind the lens.

“I am passionate about the outdoors in general, and loved I could travel to many different places all over the United States to capture different species and environments,” the 78-year-old said. “Each place evoked different feelings in me, contributing to an overall effervescence I experienced when being in and photographing the outdoors.”

But a stroke in 2014 took away his physical ability to take pictures.

“I miss being able to get out in a natural environment, observe it, get lost in it and capture those moments in my photography,” LaMasters said.

But the Barrington of Carmel assisted living resident has found a new direction for his passion. He recently exhibited his work through the Barrington’s Masterpiece Living program.

“I agreed to participate because my work inspires me, and I wanted to share that inspiration and joy with fellow residents and team members,” LaMasters said.

He spent several months poring over his work, carefully selecting 20 of his favorite photographs to put on display.

“The exhibit was well received by residents and team members alike,” LaMasters said. “Viewers were receptive to the photos and remarked on how the work left them feeling inspired.”

Fellow resident Carolyn Black, who recently started painting, was so inspired she turned her favorite image into a painting that now hangs in her home.

“I fell in love with his photograph of bees in a water lily and thought to myself how much fun it would be to paint a replica of that image on my own,” Black said. “Michael seemed overjoyed when I asked him if that would be okay.”

“I was flattered she wanted to replicate one of my photographs in the form of a painting,” he said. “She said it was difficult to recreate the photograph I captured, as there was so much attention to detail.”

Although LaMasters isn’t planning another exhibit at this time, prints are available for purchase at lama.smugmug.com.

Athlete of the Week: Carmel High School safety finds his talents on the football field, not in the pool
Share. Twitter Facebook Pinterest LinkedIn Tumblr Email
Previous ArticleFishers named Indiana Chamber of Commerce’s Community of the Year
Next Article Riverview foundation raises more than $90,000 from its Fire & Ice 40th anniversary gala
Follow us on Social Media