You are at:Home»Current in Geist»Lights on Main: Fortville preps for 8th annual winter festival with new attractions 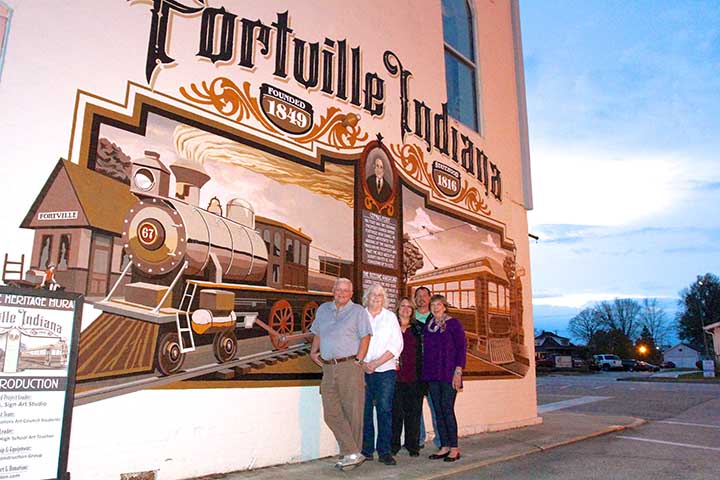 From left, Cindy and Gene Akers, Dave and Sharon Beatson and LindaMarie Hanson are committee members with Fortville Action Inc. and organize the Fortville Winter Festival each year. (Photo by Sadie Hunter)

For the eighth year, the Fortville Winter Festival will take over Main Street in downtown Fortville.

Put on my Fortville Action Inc., an organization that focuses on making the Fortville community better as a whole, and set for noon to 7 p.m. Dec. 3, area residents will have the opportunity to again enjoy the festival that celebrates all things holiday, highlighted with the annual parade, Snowflake Princess Pageant, food, live music and more, but with a few added features.

Here’s a breakdown of what guests of this year’s festival will see: 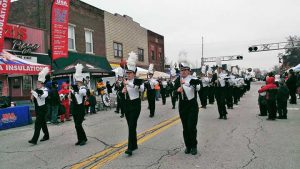 Several bands will perform in the parade. (Submitted photos)

Starting promptly at 3 p.m., area organizations, businesses and groups will travel down Main Street for the Fortville Winter Festival Lights on Main Parade.

“The Fortville American Legion and VFW will serve as the color guard for the parade, followed by police officers, firefighters and other public safety officials,” said Cindy Akers, the parade coordinator and a committee member with Fortville Action Inc.

The parade’s grand marshal will be Kammy Hiner of Kammy’s Kause, a nonprofit group with a mission to raise awareness of 4P, also known as Wolf-Hirschhorn Syndrome.
“The new Taxman Brewing Company will bring their truck and be featured in the parade,” Akers said, along with a local cement mixer, various floats, cheerleaders, mini horses, marching bands and the famed martini-drinking pink elephant with glasses from Elite Beverages in Fortville.

Open for all girls in Kindergarten to fifth grade, the Snowflake Princess Pageant is a tradition for Fortville.

“While it’s not a contest, and each girl is a snowflake princess, participants will work with the local dance studio, Accents in Motion, to rehearse the routine that will be performed during the parade,” Akers said.

The snowflake princesses will escort Santa into Fortville at the end of the parade, and traditionally, registration costs are completely donated the annual Shop with a Public Servant program that provides gifts to less fortunate children. Money raised will be presented at the tree-lighting ceremony, and one name will be drawn at random for a princess to help Santa flip the switch on the Fortville Town Christmas Tree.

Families and parents of small children are invited to decorate strollers and wagons for the Fortville Winter Festival’s first-ever stroller and wagon brigade, featured just before the Snowflake Princess performance during the parade.

To be a part of the brigade, community members can donate money, which be presented to the Fortville Police Chief later in the evening for the Shop with a Public Servant Program. Those interested can meet at the Fortville United Methodist Church/Landmark Park for the parade lineup at 2 p.m. For more, call Leann Wright at 317-695-6830.

At 6 p.m., the public will gather for the town’s annual tree-lighting ceremony. Santa and one snowflake princess will turn on the lights to the town and the Fortville Town Christmas Tree, located in front of the post office at 101 S. Main St.

“When we light the tree, the water tower lights up behind the tree as well,” Akers said. “This is a big part of what makes kids want to be a snowflake princess.”

Each year, the shops in downtown Fortville take this event and use it to keep their stores open longer to encourage holiday shopping downtown. But aside from extending their hours, merchants also partake in the festivities, some creating holiday window displays and more.

“Luminaries are put out by shop owners,” Akers said. “Some have lights on top of their  buildings, too.”

Shopping can be done outside as well, as local craft vendors will set up along Main Street.

For food, Akers said there will be vendors all down the street offering a large variety of options.

“Once the parade has gone through, there will be wooden burn barrels, picnic tables, hay bales all up and down the street for people to sit and eat,” she said. “One of the food vendors this year is Tyner Pond Farms. They’re bringing in a 25-foot trailer and selling foods like beef stew and other stuff…warm, comfort foods.

Several performances will take place after the parade as well, including the high school choir and two a capella groups near the post office. Performances from carolers and school bands can also be expected, as well as a local radio station.

“This year, instead of the main music stage, performances will be featured up and down the street,” Akers said. “That way, no matter where you are on the street during the festival, something will be near you.”

Also new this year will be demonstrations from Koorsen with fire-training dogs, teaching fire safety to children. 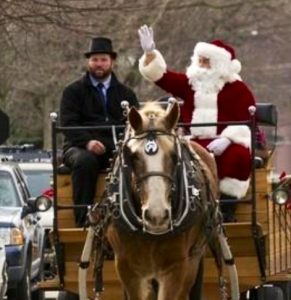 A carriage carrying Santa will finish off the parade.

Established and founded more than five years ago, on Nov. 4, 2011, Fortville Action Inc. shortly after received Mainstreet Designation from Indiana Main Street and got to work.

“Fortville Action was developed so that we could bring people into the town and show them what we have to offer, to promote the community, to promote the storefront,” FAI committee member Cindy Akers said. “(We) sponsor other events throughout the year, too, like Music on Main, Movies on Main, a weekly car show and annual car show, women’s night out, etc. We just want to highlight everything. We love our town, and we want other people to enjoy it, too.”

Mission statement: To foster a spirit of community teamwork and to strengthen, revitalize, and broaden the economic base of the community area, while improving the appearance of the town, and promoting and marketing Fortville as a vibrant place to visit, work, shop, play and live.