Catherine Rubey didn’t originally see her story as a holiday one. 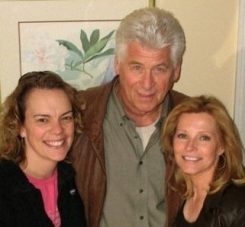 “It wasn’t originally written as a Christmas movie. As we got into pre-production and some rewrites, it was pushing our production dates into winter, so it just made sense to change that setting and really play up some of the holiday scenes and elements that were already in the story,” said Rubey, a 1992 Indiana University graduate who has lived in Carmel for three years. “We added the backdrop of Christmas to give it that last big push to get it done.”

It turned out to be a good move as “Holiday Baggage” became a holiday favorite, first on Lifetime from 2010 through 2014. It then switched to Hallmark Channel. And as of Dec. 1, it has been added to Netflix as one of the Holiday Favorites.

“We’re really proud. It’s like the little holiday film that could,” Rubey said. “We did a lot with a little. We told a story that resonates with people still today.”

“He’s a retiring pilot on the cusp of a new life who has to reconnect with his adult children while he and his soon-to-be ex-wife contemplate finalizing their divorce and moving on officially,” Rubey said.

Stephen Polk served as producer, director and helped with the rewrites. He also played a role in the movie.

“We knew we had something special. We just had to get it to the audiences,” Rubey said. “I really have to credit Stephen Polk for seeing that through the production and editing process, making sure to shepherd the project throughout the post-production and the distribution process.”

The result was successful.

“Our investors were able to get all their money back with a little cherry on top,” Rubey said. “Everybody was paid properly for all their work. For an independent film, to say that is a victory in this business.”

Rubey and Polk are collaborating on a follow-up to “Holiday Baggage,” and it’s in development now.

“There are all kinds of directions we can go, and the characters still resonate today,” Rubey said. “Our focus is going to be on the adult children.”