You are at:Home»Current in Zionsville»Zionsville Police Department honors Officer of the Year 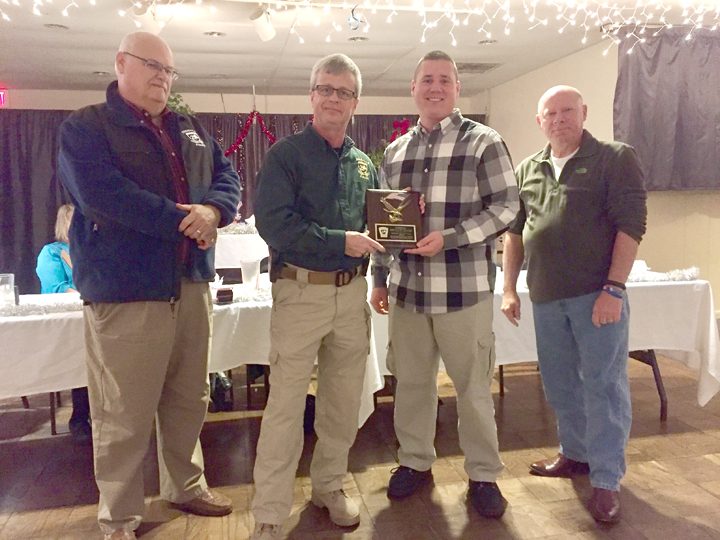 Zionsville Police Dept. Lt. Bryan Sauer heard rumors he might have been nominated for Officer of the Year. But he’s heard those rumors in previous years.

“I didn’t put much thought into it. I was absolutely shocked,” Sauer said when his name was announced at the ZPD Christmas Awards earlier this month. “I had no clue that I even had a shot at getting it. I’m the first person as a supervisor rank to get it. In the past, everyone who had gotten it had been an officer at the time.”

ZPD Chief Robert Knox said Sauer is dedicated and well-respected by his colleagues.

“He’s been promoted a couple times since I’ve been chief,” Knox said. “He does a really good job as a supervisor. He’s our senior emergency vehicles operations instructor. He’s one of the directors of the reserve division. He’s also one of the field training officers for the agency. He puts in quality work and we thought he was deserving of this recognition.”

The nominations come from the officers in the department, and the administrators make the choice. Sauer, a Whitestown resident, was modest about his selection.

“For the most part, I didn’t do anything above and beyond what others do,” Sauer said. “As a lieutenant, I’m responsible for a lot of things. I just see it as doing my job. As night shift lieutenant I’m responsible for both night shifts, so anything that happens at night flows through to me. I help out with our cars, put the police equipment in them and maintain them. I re-did the field training program this year. I’ve worked a lot of extra days to allow other people to go to training and cover other people’s vacations. I’m on the Bike Patrol.”

Sauer, who has been with ZPD for 13 years, has been a lieutenant for more than a year. He graduated from Franklin Central High School in Indianapolis in 1998 and IUPUI in 2002 with a bachelor’s of science degree with a major in criminal justice and minor in sociology.