You are at:Home»Current in Carmel»Carmel Community»Carmel stay-at-home dad publishes book about day-to-day life

Brian Craig and his wife, Jordan, have a lot of experience at being stay-at-home parents. Both have stepped back from working at different times to be home with their three children. 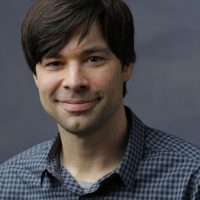 “For her, she was just around a baby, so it wasn’t a lot of getting to do fun things,” Brian said. “When I was home I had three small kids, so we were able to go on adventures and go to the park.”

Brian, a former teacher at Creekside Middle School, recently accepted the role of stay-at-home dad and began writing about it for Indy’s Child magazine. In December, he published a book about the experience, “Lone Pair of Blue Jeans in a Sea of Yoga Pants.”

The Carmel resident was inspired to write the book after writing for the magazine and posting updates on his blog.

“I wanted some kind of a way to record those memories,” Craig said. “I kind of wanted to do something like that to keep my mind on reading and writing and being creative like I did while I was teaching.”

The Craigs had their first child while Brian was working as a middle school teacher at Creekside Middle School and Jordan was finishing medical school. Jordan took a year off of school and stayed home. She now works as an OBGYN.

It was not until they were about to have their third child that Brian started to take on the role of stay-at-home dad.

Now that all three of their children are full-time students, Brian said he plans to continue to become more involved with Indy’s Child.

Brian’s blog, A Dad Influence, can be read at indyschild.com/a-dad-influence/.

“Lone Pair of Blue Jeans in a Sea of Yoga Pants” can be purchased in paperback or online from Amazon.