You are at:Home»Current in Carmel»Carmel Community»Fastrich recognized as swim coach in Pennsylvania 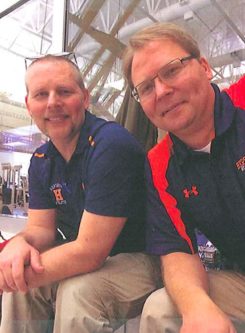 Swim coach of the Hershey Aquatic Club and Carmel native Greg Fastrich was inducted into the Pennsylvania Aquatics Hall of Fame on March 19. Greg Fastrich, right, pictured here with his brother, Jeff Fastrich, swam for Carmel Swim Club and for Carmel High School. Greg swam for the CHS boys swim team when the team won the Boys High School State Championships in 1990.

He then went on to receive a swimming scholarship from Purdue, where he swam for four years following in the footsteps of older brothers George and Jeff who also received swimming scholarships from Purdue. Swimming is in the blood for the Fastrich family. Their father, John Sr., of Carmel, swam in high school, college and in the Air Force.