You are at:Home»Current in Zionsville»Zionsville Plan Commission votes to give Amberly another look 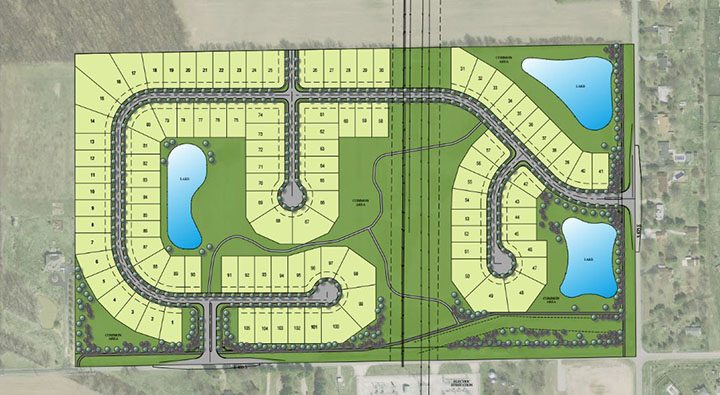 A revised plan for Amberly, submitted to the Town of Zionsville March 29. (Submitted photo)

The Zionsville Town Council in February denied plans for Amberly, a proposed 72-acre subdivision at the northwest corner of CR 400 S and CR 875 E, but developers are seeking another chance to be heard.

The Zionsville Plan Commission decided March 20 to express support for waiving a requirement to wait a year before taking another look at plans for a site that had been voted down. The town can choose to revisit a petition within a year if plans change significantly, which they did, according to attorney Andy Buroker, who represents petitioner Beazer Homes. The Zionsville Town Council will make the final decision on whether to grant the waiver.

The new plans call for 105 homes, 15 less than the previous version. They also call for a rezone to RSF2 rather than R2. The land is currently zoned R1.

“I don’t really have a problem with letting them go to the town (council) to make their point on this,” ZPC President David Franz said. “It’s going to get developed in some form or fashion, so to an extent it’s what you know vs. what you don’t know. I think they made a good effort in modifying the plan based upon the comments they heard.”

Robin Meyer, who lives near the proposed neighborhood, urged the commission not to waive the one-year waiting period. She said she’s been remonstrating against subdivision development proposals on the land since 2005.

She said that progress on Hampshire, another Beazer neighborhood under development to the west, is behind schedule and that developers have “bitten off more than they can chew.”

“A lot can happen in a year. I don’t think it’s any hardship for Amberly to wait a year to see what’s going to happen with Hampshire,” Meyer said. “We don’t have a lot of experience with Beazer in Zionsville. Let’s see what they give us before we give them permission to do more.”

The Zionsville Town Council is expected to address the issue at its April 10 meeting. If it approves waiving the one-year waiting period, developers are expected to present the new plans to the ZPC in May.