You are at:Home»Current in Fishers»Alta Glide Inclusive Glider offers opportunities to those with special needs

Will Jones has undergone 37 surgeries and procedures during his young life. Doctors said he wasn’t expected to live past the age of 8. Will is 13 and has cerebral palsy. In addition to the struggles associated with his disability, Will’s mother Dr. Lyn Jones struggles to find suitable playground equipment for son in local parks. 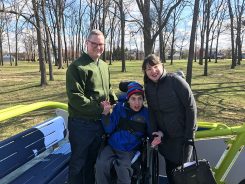 Dr. Jim Jones and Dr. Lyn Jones said they are excited for their son Will Jones to be included on the new Alta Glide Inclusive Glider Swing installed at Holland Park March 10. (Submitted photo)

An Alta Glide Inclusive Glider Swing was installed in Fishers’ Holland Park March 10. The swing is different than other wheelchair-accessible swings, which Lyn said seem almost like a cage and are isolated from other playground equipment.

Another plus, Lyn said, is the new swing isn’t isolated.

“It was put in Holland Park, right there in the heart of Holland Park,” she said. “Right there, not far away from everybody else. There’s no cage around it, and it’s very welcoming and opening and inviting.”

A major player in the swing’s installation was Fishers City Council member Cecilia Coble. She  also has a child with a disability.

“Not a lot of action was taken until Cecilia Coble became city councilwoman,” Lyn said. “She got (deputy mayor) Leah McGrath and (parks director) Tony Elliot to listen. So, it was finally finding the right person to not just listen to me but hear me and make a difference. There was a need and we needed something here in Fishers.”