You are at:Home»Current in Zionsville»InterActive Academy swim instructor charged with voyeurism, child exploitation

An InterActive Academy swim instructor was arrested March 24 after allegedly hiding his cell phone in a restroom and recording video of an underage coworker changing her clothes. 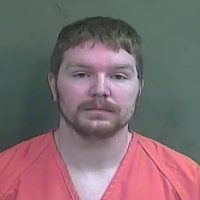 Lee Michael Camden, 23, of Whitestown has been charged with voyeurism and child exploitation. He was booked in the Boone County Jail but released after posting bond.

According to court documents, on March 18 a 17-year-old swim instructor ran into Camden in the girls bathroom, where he told her that he was getting lotion and quickly walked out. As the girl was changing her clothes, she noticed an iPhone propped on a cabinet facing her direction. She saw that it was recording, stopped it and deleted the video, knowing it would still be in a recently deleted folder on the phone.

The document states that she called another 17-year-old swim instructor into the bathroom to discuss the situation and that Camden then asked them if he had left his cell phone in there. Camden told the girls that sometimes the phone’s camera unexpectedly records, and he unlocked it so one of the girls could permanently delete the video, which she did after texting it to her phone and erasing the text.

The girls reviewed the video, and the report states that they “noticed in the video Camden set up the camera, checked the setup, then left the camera on the shelf.” They also saw that one of the girls was visibly nude from the waist up.

During an interview, Camden told Zionsville police that he had left his phone in the bathroom while he was getting ready and that “it just randomly turns on and starts recording.” He also told police that he always erases accidental videos on the phone without viewing them.

InterActive Academy officials released a statement regarding the incident.

“On Saturday, March 18, we were advised that a male employee was accused of setting up a cell phone camera and filming another employee in the pool staff bathroom. We reported this matter to the Zionsville police department who are now investigating the allegations. The employee involved has been terminated. We are fully cooperating with the investigation being performed by the Zionsville police department,” it stated.

Camden’s arrest comes four months after former InterActive Academy gymnastics coach Kenneth “Andy” Arnold was charged with two counts of child molesting and one count of battery for incidents that happened at the facility.