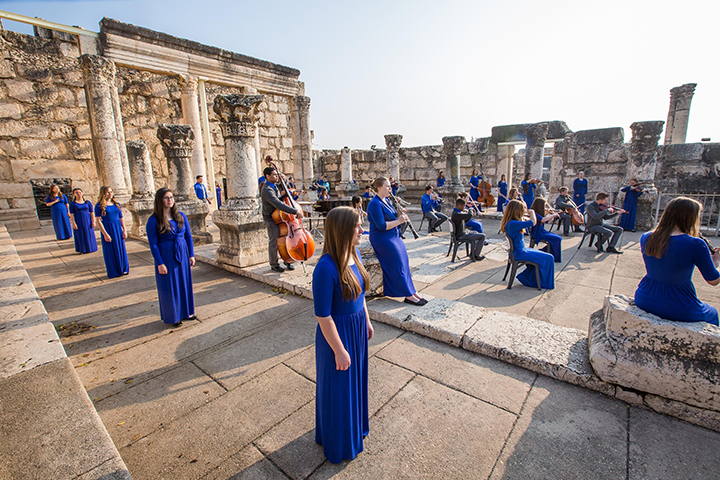 The Advent Herald Symphony & Singers performing at the Synagogue of Jesus in Capernaum.
(Submitted photo)

The central Michigan-based group of high school-aged performers filmed from spots where Jesus walked during a trip to Israel.

“We filmed the place where Jesus was tried by Herod’s court in Jerusalem on that Friday he was crucified,” music director Craig Cleveland said. “We filmed on the Mount of Olives at day and night. We rode camels toward Bethlehem.”

The group will be performing at 7 p.m. April 25 at the Carmel Seventh-day Adventist Church, 14535 Carey Rd.  Cleveland’s brother-in-law, David Tenold, is the pastor of the church.

“We have a wind symphony, and a full symphony and singers,” Cleveland said. “There is a lot of gospel music. We love the (Gaither Vocal Band) music and we perform a lot of it. We’ll be singing a lot of music from (Israel trip) and share pictures from the trip. I’m sure we’ll show a video clip or two.”

The group will share memories during the concert. They also filmed at the Sea of Galilee, the synagogue in Capernaum and the walls of Jerusalem.

“It was a thrilling trip,” Cleveland said. “We did have dramatic times. We were run out a couple of times by people that didn’t want to hear about Jesus. There was an irate man in a public park who said we were desecrating his family’s graves, and there was a cemetery nearby, because we were singing about Jesus and we had a cross up as a prop. It was night and we were singing a big gospel piece about the trial of Jesus. He was yelling and yelling.”

Cleveland tried to calm him while they continued filming. Then the man called the police. The guide said while it was legal to film there, he wasn’t sure how the police would handle it. So they quickly got two takes, packed up and left quickly.