You are at:Home»Current in Zionsville»New officer eager to serve with Zionsville Police Dept.

After working as a police officer in his hometown, Mitchel Tuttle realized he wanted something more. 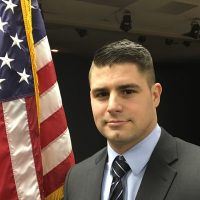 “I realized that I wanted to come to a bigger department that was growing fast and that had a lot of upside potential for my longtime career goals and also a wonderful department to be a part of,” Tuttle said.

He set his sights on Zionsville. He achieved his goal when Mayor Tim Haak officially welcomed Tuttle to the Zionsville Police Dept. with a swearing in ceremony at the March 20 town council meeting.

“I took it as a big honor,” Tuttle said. “The words I say I really mean. I really hope to uphold this (town) and its high value. Like I said, it’s a great town, so I don’t ever want to let it down or dirty its image in any way.”

Tuttle, 26, grew up in Greensburg, a small town where everyone knows each other, he said. He was inspired by a local police officer to pursue law enforcement.

“It was a police officer from Greensburg that was really big into interpersonal relationships with high school students,” he said. “He reached out to me. My dad kind of wasn’t there when I was growing up, so he just kind of became that role model for me, and I always felt like that’s what I wanted to do with my life.”

Tuttle studied criminal justice at Anderson University before landing a job as a jail officer at the Decatur County Jail. Later, he joined the Greensburg Police Dept., where he worked for two years.

Now, Tuttle is starting fresh in Zionsville, learning locations and how the department works. He will be riding along with officers for the next few weeks to train.

“My officers that are training me right now are very smart and very wise about what they’re doing,” Tuttle said. “They have a lot of knowledge for me, and I already feel like I’m growing and learning more and more every day from them.”