You are at:Home»Current in Carmel»Carmel Community»Carmel to put Range Line Road on a ‘diet’ with upgrades 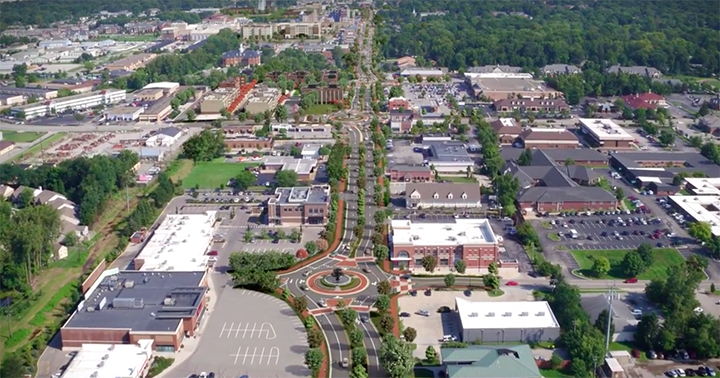 Several roundabouts and other improvements are planned along Range Line Road to make it safer and more pedestrian friendly. (Screenshot)

With more cars on the roads, some cities decide to create additional lanes on certain streets. The City of Carmel is planning to do the opposite. With  more than 20,000 cars traveling on Range Line Road daily — and more coming in the future as new office buildings are under construction — Carmel is putting put Range Line on a “diet” by eliminating lanes and creating a center median.

Brainard said traffic medians help slow traffic and reduce head-on collisions. He often refers to the center-turn lane on parts of Range Line Road as the “suicide lane” because cars in both directions can turn left there.

“When you add more lanes, all we’re really doing in our opinion is building a larger parking lot,” he said. “Under this plan, cars will be going slower even though they’ll be flowing just as fast if not faster because of the wait time at intersections.”

Brainard said similar “road diet” projects throughout the country resulted in an 88 percent reduction in accidents with injury because of slower driving speeds, safer pedestrian paths and the increased safety of roundabouts. 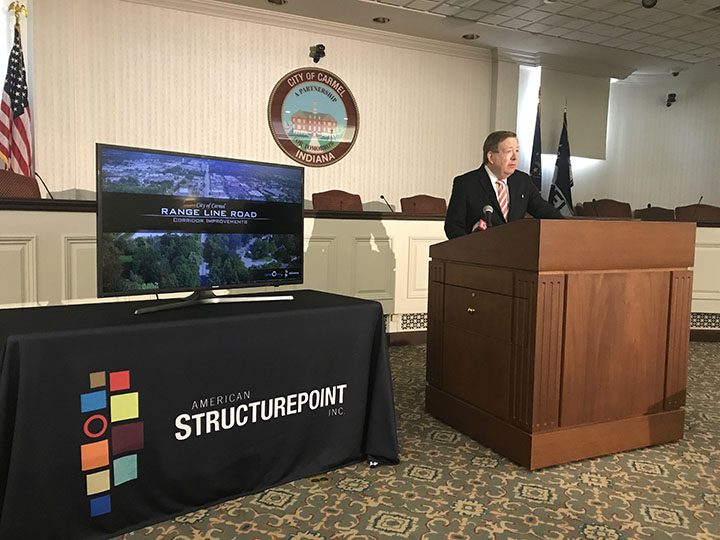 Brainard said Range Line Road is already an important corridor, so it’s important to beautify the street, which will help turn it into a hub of economic activity for local merchants. Brainard said there will be lots of trees planted, but they likely won’t obstruct views of traffic. Public art also is part of the plan. The additions can be placed in landscaped medians to create a scenic drive. There will be wider pedestrian paths with trees and other planters as a buffer for cyclists.

In addition, Brainard said overhanging wires from traffic lights are unsightly, so it’s nice to replace them with new roundabouts at Executive Drive, City Center Drive and 4th Street. A new roundabout opened in late 2016 at Carmel Drive, and new roundabouts also will be added at Medical Drive and 116th Street, although that is south of the “road diet” project. The next planned roundabout is for City Center Drive, with construction starting after April 24 and lasting  until July 1. Brainard said it will be complete before the city’s annual Fourth of July parade.

All of the roundabouts will have two lanes.

Not all of the sidewalks connect along Range Line Road, and in some places there is no bike lane or sidewalk, making it difficult for runners, cyclists and pedestrians to traverse the road. The city will add 8-foot-wide mixed used paths and cycle tracks on the east side with a physical barrier to protect cyclists, likely planters with flowers. The cycle tracks will be specially marked and made of special material for speedy yet safe commutes for cyclists.

With the elimination of traffic lights, pedestrians and cyclists can no longer wait until a red or green light to cross an intersection. As a result, the city will build mid-block pedestrian crosswalks to enhance the pedestrian experience. They will be similar to what is done at Clay Terrace with a raised surface and a motion-activated crossing light so motorists can either slow down or come to a stop to allow pedestrians to cross. Brainard also noted that medians provide an “island” of sorts for safe pedestrian crossing.

Some local business owners along Range Line Road were in attendance during the announcement April 17 and had questions about customers or delivery trucks getting to their businesses. Brainard admitted that in some places the median will eliminate the easy left turn, but he said there will be curb cuts in some places and motorists can always travel up to the next roundabout and turn around to enter a business. He said the aesthetics, safer travels and smooth-flowing traffic will bring people to the area, which will be good for businesses.

The project will be funded through previously passed local improvement bonds.

A video that shows the project is available to view at youtu.be/fmvDiEtf3tQ.