You are at:Home»Current in Westfield»In the Zone: Ninja academy teaches discipline, respect 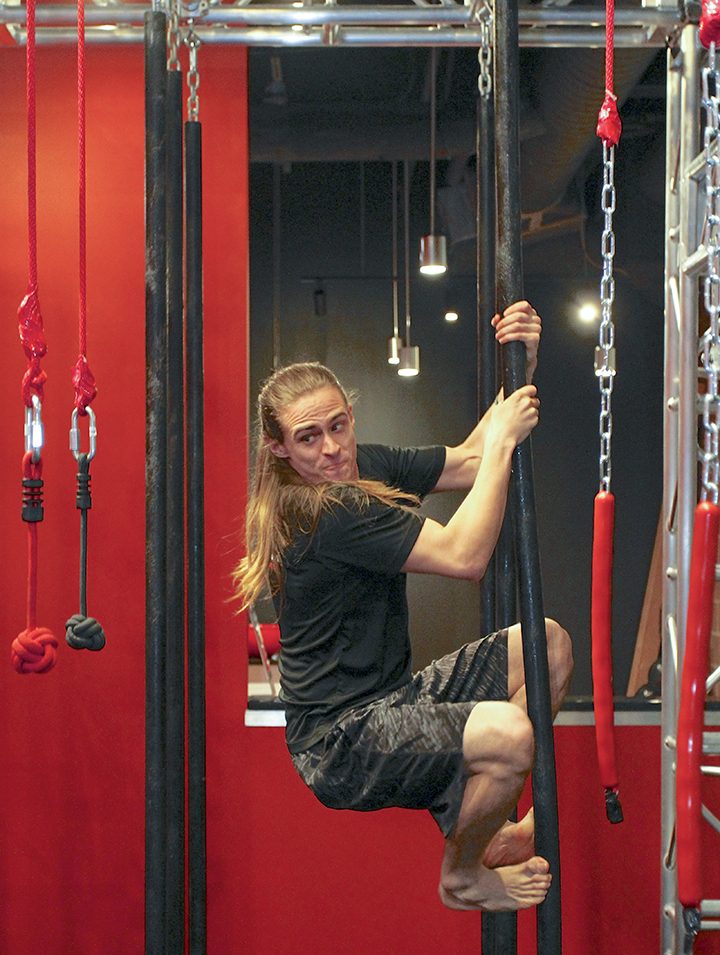 Danny Wohlschlaeger knows what it’s like to be a 5-year-old boy wreaking havoc on his family and home. He also knows the best way to teach life’s principles to a young boy is by putting all that energy into something useful. 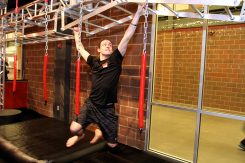 Danny Wohlschlaeger exhibits what it’s like to be a ninja at the new NinjaZone Academy at the Grand Park Events Center. NinjaZone Academy opened last month and is designed for kids ages 3-13. (Photos by Sadie Hunter)

Wohlschlaeger originally learned about the ninja sport through gymnastics, which he began coaching his senior year of high school. Originally a wrestler, it didn’t take him long to learn the ropes.

“I was coaching a lot of gymnastics (at FUNdamentals gym in Westfield), and Casey had the NinjaZone program already started,” he said. “She opened this gym (FUNdamentals) to just be another gym for NinjaZone to expand in. She just loved my energy and the way I engaged kids, and she asked me to be the curriculum director for NinjaZone. So, I went through and rewrote curriculum for the ninja program.”

With the young ninjas, ages 3-13, Wohlschlaeger doesn’t teach back-handsprings and round-offs. Especially with the young boys, he helps direct their focus to something tangible which also burns energy, such as making their way through obstacle courses.

“Ninja was really breaking into an untapped market,” he said. “What do you do with a 5-year-old kid that’s a boy? They just run around, and they just climb on stuff and they never stop talking and they’re just crazy. All of them are. It’s very rare I meet a 5-year-old ninja that isn’t like just nuts, but in a totally good way, because I really believe that energy is going to be used for something so cool when he’s older. I was probably a terrible 5-year-old child, but now that energy is being used for something so much bigger than my parents ever thought about. It’s cool that NinjaZone gives these kids an outlet to be crazy and run around but also learn about respect.”

“If you’re not giving it 100 percent and you’re not getting something out of it, you’re wasting time,” Wohlschlaeger said. “I think it’s good being able to speak life into these kids. You have to learn how to listen to somebody other than your parents. We are creating early positive experiences.”

“Danny is the adult version of so many ninjas in our program. He is full of energy, love and confidence. He connects with kids, peers and leaders in a way that few people can. He exhibits what coaching should be,” Wright stated in an email to Current. 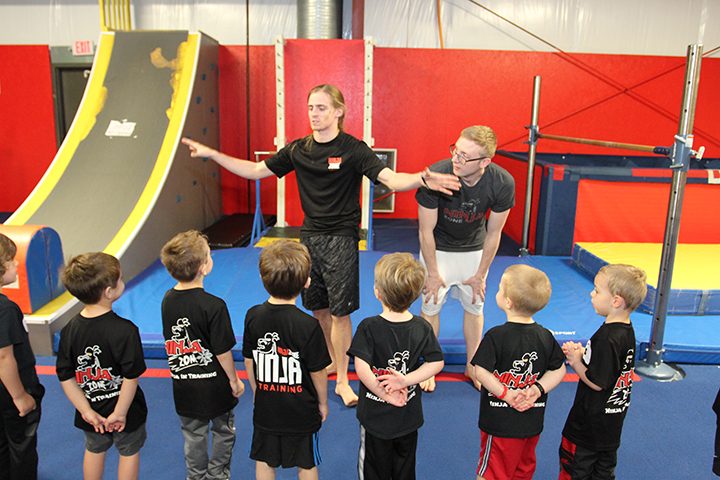 The National Ninja Games, created by the NinjaZone, will be held Aug. 15 in Indianapolis. The competition, similar to America Ninja Warrior but for kids, will feature obstacle courses with martial arts, gymnastics and more.

“Kids are tested on all the things they learn throughout the year at ninja class, and they get to put that into two obstacle courses,” Curriculum Director Danny Wohlschlaeger said. “They are timed on obstacle courses, judged on execution and based on fluidity and amplitude and how flashy it is. It’s really just awesome because girls have dance recitals and all these things growing up to get involved in, and boys typically just aren’t doing that. They aren’t doing dance recitals in pre-school class, but ninja games are like they’re putting on a show with this huge introduction.”