Every dog owner knows that panic when their dog gets loose and runs off. 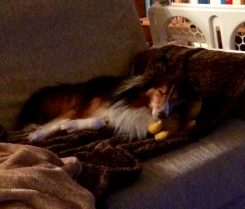 For Judy Corbett, her beloved 7-year-old sheltie, Eppie, had a head start of several hours when she accidentally was left outside the house all day.

“No one knew she had gotten out, so everyone went to work. We came home and we started to panic when she wasn’t in the house, so we canvassed the neighborhood,” said Corbett, who lives in Cedar Bend in Zionsville. “One neighbor saw her running to another neighborhood.”

Eppie didn’t have her collar on, so there was no identification that would help get her back home. But the Zionsville community stepped up to help.

A neighbor suggested using the Nextdoor neighborhood app, where residents can alert others nearby about community news, such as a lost dog.

“There were sightings, but no one could catch her,” Corbett said. “She’s very timid, anyway.”

A representative from the volunteer group, FIDO, which helps finds lost dogs, also stepped up to help.

“She went with me to the last sighting area, and we set up two feeding stations 500 feet or so apart, and there were motion sensor cameras to snap pictures,” Corbett said. “We put food out morning and night and we had SD (secure digital) cards in the cameras. We exchanged the SD cards morning and night to look to see if she had been to that feeding station, with the ultimate goal of putting a crate with food in it, which would close automatically. We never got to that point. (Eppie) was ranging very far.”

Corbett said the FIDO representative had several good suggestions, like setting up yard signs where she was sighted.

Fortunately, after several days being loose, Eppie was found exhausted but safe in someone’s yard and was taken in for a day and fed. She was taken to the 96th Street Michigan Road Animal Hospital in Indianapolis, the same veterinarian the Corbett family uses. Corbett said the veterinarian staff thought she looked familiar but couldn’t place her last name. A groomer who had seen postings of a lost sheltie found a Facebook posting of Corbett’s flyer.

Eppie, who weighed 18 pounds before she went missing, lost five pounds during the ordeal.

She now has a microchip to identify her, and Corbett is planning to build a fence.