You are at:Home»Current in Zionsville»Development, small business marketing discussed at Zionsville’s inaugural Mayor’s Night In 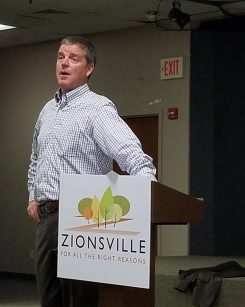 Zionsville Mayor Tim Haak held the inaugural Mayor’s Night In event in Zionsville April 26 at Town Hall. The event provides an opportunity for the public to hear community updates and participate in a Q&A session.

“It’s going to be a busy summer,” Haak said. “We’re spending more money this year than we ever have.”

Construction on the new town hall building is progressing and move-in is scheduled for October. The Creekside Corporate Park sign is up and the trails in the park officially opened April 27.

Zionsville was selected as a finalist in the Little League’s search to relocate the Central Region Headquarters.

“We think that would be a huge win for Zionsville,” Haak said. “Three weeks out of the year on ESPN they’ll be saying ‘live from Zionsville, Indiana.’”

The Q&A portion was dominated by two topics: parking and marketing. Multiple Main Street shop owners voiced concerns about the lack of available parking spots, especially during construction when company trucks take over spaces or new restaurants are added without adding parking.

They also discussed the lack of community marketing, saying that there is very little support of small business owners from the town and Chamber of Commerce. This comes after two Main Street staples have announced in recent weeks that they will no longer have their own storefronts: Earth Explorer Toys, which is going out of business, and Inga’s Popcorn, which will sell its goods at Ballerinas and Bruisers and online.

The shop owners suggested including brochures at each business, updating maps to only include current businesses and using those tools to market the entire Zionsville community rather than a specific business.

Haak said the town does not have a marketing department, so there is very little money available to put toward marketing, but he wants to increase that budget.

The second Mayor’s Night In will be held in the fall.