You are at:Home»Current in Carmel»Carmel Business Local»The Old Spaghetti Factory to move into former Shapiro’s building 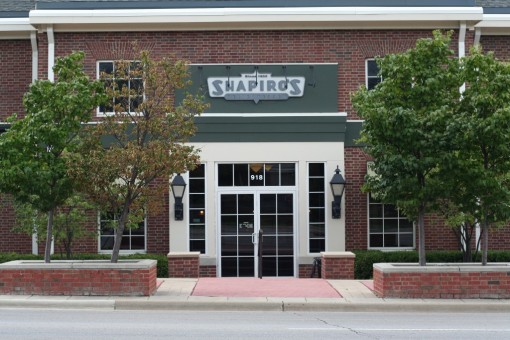 The Old Spaghetti Factory is planning to move into the building that once housed Shapiro’s Deli at 918 S. Range Line Road. (File photo)

The Old Spaghetti Factory is planning to move into the building once occupied by Shapiro’s Deli at 918 S. Range Line Road.

The Italian restaurant plans to occupy the entire building, which has more than 10,000 square feet of space. It is expected to be open by summer 2018 and employ approximately 100 people.

“It will be a great addition to everything that’s going on in downtown Carmel, a great place for families, for business meetings, for events,” said Melissa Averitt, senior vice president at Pedcor Companies, which owns the building and will lease it to The Old Spaghetti Factory. “It’s going to be a really nice addition to what’s already a booming area.” 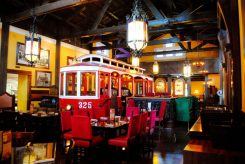 The Old Spaghetti Factory features a trolley in the dining area where guests can enjoy a meal. (Submitted photo)

Ryan Durrett, The Old Spaghetti Factory director of marketing, said the family-owned company looks for sites that are near families, involved communities and that can incorporate the restaurant’s traditional décor, including a trolley car that guests can dine in. He said officials were also drawn to the “ongoing enhancements” in the area.

The Old Spaghetti Factory’s first central Indiana location opened in downtown Indianapolis in 1982. The success of that restaurant, which will remain open, was a contributing factor in looking to open a second location nearby.

“To be able to build the relationships we’ve built in Indianapolis over the last 35 years is so rewarding,” Durrett said. “It’s one of the main reasons we wanted to look to extend that outside of the downtown area.”

Averitt said Pedcor had been in discussions with The Old Spaghetti Factory about the site for approximately a year.

Durrett said he doesn’t know when interior construction will begin.

“We’re at the very, very beginning of the design phase,” he said. “At this point we’re getting familiar with the space, the structure, and starting to see how our layout would work within the building.”

The building has been vacant since June 2013, when Shapiro’s Deli President Brian Shapiro closed the struggling restaurant to focus on his other locations. Shapiro’s Deli opened in Carmel in 2001 as the first occupant of the City Center development.

The Carmel Redevelopment Corp. bought out Shapiro’s nearly $2.5 million mortgage in 2010. It sold the building to Pedcor in fall 2014.

The Old Spaghetti Factory will have 45 locations throughout the U.S. when the Carmel restaurant opens. Guss and Sally Dussin launched the business in 1969 in Portland, Ore., and their son, Chris, is now the company’s chairman.