You are at:Home»Current in Carmel»Carmel Community»Carmel resident honors mother in ‘Chicken Soup for the Soul: Best Mom Ever!’ 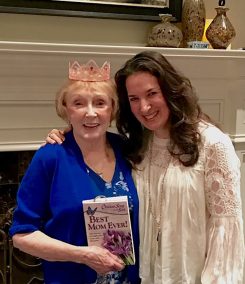 Osborne said the inspirational “Chicken Soup” series is among her favorite reads.

“This one really hit me because it was a book about moms,” she said. “My mom is one of the hardest working people I’ve ever met, so I really wanted to do something to honor her. It was my first submission, and sure enough, I got in.”

It’s “Never Too Late” tells the story of her mother, Lori Mansell, on a journey to becoming a writer herself.

“My mother was crowned the Erma queen at the Erma Bombeck Writers’ Workshop last year. When she stepped up to the microphone she gave this cute little inspirational speech about her becoming a writer and how it’s never too late. She’s actually starting her writing career now,” Osborne said.

“I’m kind of re-starting my career. I’m really in awe. It’s such an honor to be in the ‘Chicken Soup’ family. It’s never too late for my mom or for me,” Osborne said.

She recently held a surprise party to present her mom with the book.

“My mom had no idea. I called her up to the front of the party and presented her the book. She was just really shocked. It was wonderful,” she said.

For her part, Mansell is appreciative of all the things her daughter has done for her.

“It’s the most wonderful gift I could get. I had no idea. It’s typical of the things Julie does, not just for me, but for everyone,” she said. “The fact that Julie is writing is the real gift.”

To purchase the book, visit amazon.com.