You are at:Home»Current in Geist»Sail on: Indianapolis Sailing Club starts mission to teach veterans the sport 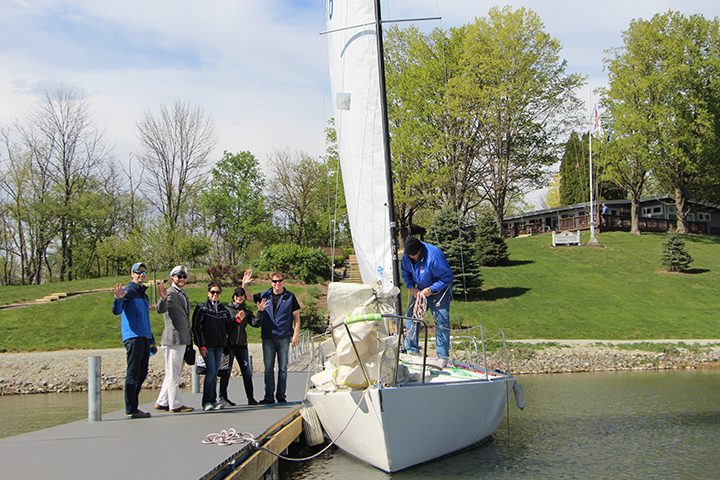 From left, Jess Lawhead, Nick Noe, Diane Harrison, Cecilia Coble and Bob Soloman pause on the dock on Geist. Soloman is helping to teach veterans how to sail. (Photo by Amy Pauszek)

Operation Set Sail has launched at the Indianapolis Sailing Club. 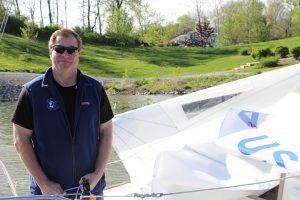 The idea was formed with some brainstorming from Fishers City Council members Cecilia Coble, David George and Bob Solomon.

George and Solomon are both avid sailors.

“We came up with the idea for something extraordinary at the Indianapolis Sailing Club to honor and empower our veterans through sailing,” Coble said. “The idea is to get them to learn how to sail. Once they learn, we want to bring kids with disabilities on to the water to sail as well.”

In addition to children and adults with disabilities, Solomon said eventually they would like to open up Operation Set Sail to police officers, firefighters and emergency responders. But teaching the veterans all the aspects of sailing began in April.

Solomon, a Carmel resident, said some of the veterans are doing well but some might  have financial hardship. 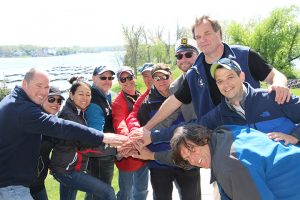 “We use the word empowering because we want to focus on veterans who have had a hard time, who have post-traumatic stress,” Solomon said.

Solomon said Army veteran Greg Reece has been instrumental in starting the program.

The plan is to take some Indianapolis area veterans along with Solomon and George to a week-long journey, with the highlight being the 46th Annual Figawi Race Weekend from May 27 to 29.

The Massachusetts sailboat race goes from Hyannis to Nantucket May 27. Two days later, they race back to Hyannis.

“We got inspired because we take the wounded veterans on the Nantucket race over Memorial Day weekend,” Solomon said. “These are special veterans the Nantucket Holiday for Heroes takes. Some of them are severely injured, and we took them four years in a row on 50-foot sailboat. The first year was smash hit.”

It kept getting better each year, Solomon said. 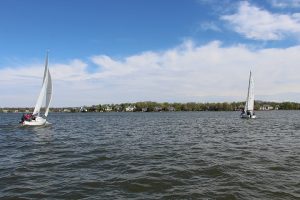 “It’s mostly people from Indiana on the 50-foot boat (with veterans),” Solomon said.

Solomon has done the Figawi Race 26 years in a row. George has sailed it for 15 consecutive years.

“It’s been a nice experience to have veterans with us the last four years because you give a little bit more time of yourself to help others,” George said.

“Sailing is a great sport and a good sport for others to try out,” said Jordan, who has been sailing since 1975.

Jordan, a Fishers resident who is a member of the Sailing Club, joined the Coast Guard because of a love of being on the water.

“This is an event that showcases all branches of the military,” Coble said. “It’s an event where you can bring your kids and learn about the history of our military and talk to the veterans.”

Solomon said the funds raised in the 2016 event will help the group pay for the veterans who need financial help to make this year’s trip. 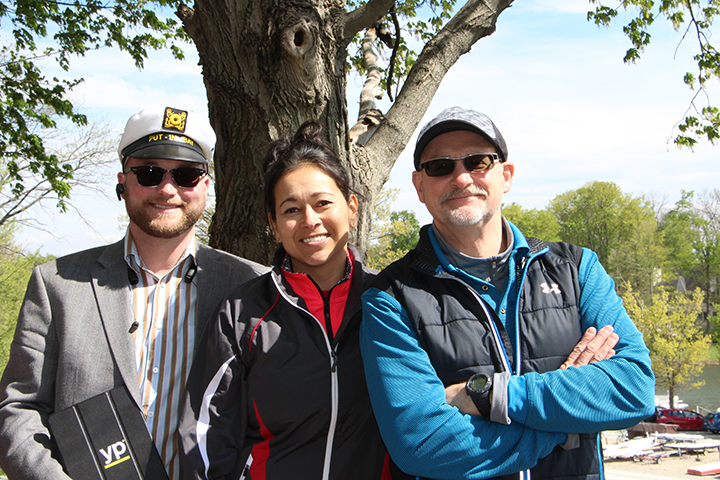 Diane Harrison, who served in the U.S. Navy from 1990 to 2001, is one of the veterans taking advantage of the sailing program.

“I was on the ship, and we had lifeboats and I never had to use them,” said Harrison, who lives on the Indianapolis south side.

Harrison had her first sailing experience in May.

“It’s going to be a crash course, but I’m a quick learner,” she said. “I’ve been on a  whirlwind ever since I’ve been with Operation Job Ready Vets. I’ve met so many new people and they introduced me to this amazing program. I’m excited to do as much as I can to help promote it and get more veterans out here.”

Nick Noe, a 31-year-old Indianapolis resident, is another first-time sailor.

“It’s something I’ve really been wanting to do,” Noe said.

He said it is nice to be with other veterans.

“This is a good, calming way to meet people,” Noe said. “It’s a nice, relaxed environment.”

Noe served in the U.S. Air Force for four years.

“It got me the structure I needed in my life to figure out what I wanted to do,” said Noe, who left the Air Force in 2015. “I got some degrees while I was in there, and since then everything have been going well for me.”