You are at:Home»Current in Carmel»Carmel Business Local»Bellisimo has new owner, new name

Marla Peebles is ready to put her stamp on her salon.

Peebles took over ownership of Bellisimo in Carmel in February. The salon has been rebranded as Society of Beauty. 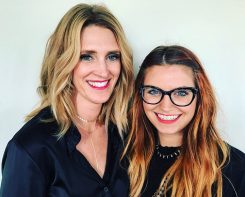 “It took me forever to decide how I wanted to name it,” Peebles said. “We knew as soon as we saw it we’re creating this society within a society. I truly believe every single person has a movie star within them. It’s our job to find it and bring it out. We’re creating an environment where we can do that.”

The open house at the salon, 12545 Old Meridian St., will be 5 to 8 p.m. May 25. Peebles took over the salon in February after purchasing it from Chuck Lazzara, owner of Ritz Charles.

“We’re having a lot of giveaways, like free haircuts for a year,” said Peebles, a Noblesville resident. “We’re doing different raffles through the night.”

Peebles said there will be different demonstrations.

“People can get their hair curled or braided, get a few lashes put on,” Peebles said. “We’ll be doing a little makeup, just fun little areas to experience new services.”

Refreshments will include cupcakes and cocktails.

“We’ve just started to change a few things and revive it a little bit,” Peebles said.

Peebles was with David and Mary salon for 20 years in Carmel. The past 2 1/2years she worked independently at Salon Lofts in Carmel.

Her daughter, Paige, who turns 24 May 24, moved from Salon Lofts with her.

“She is into the hand-painting coloring technique,” Peebles said. “She’s loving all of that. We knew when we were at Salon Lofts we were going to do our own salon (eventually).”

David and Mary Miller, who closed their Clay Terrace salon in July 2014, have had a spot at Bellisimo since the spring of 2016.

“I feel like I learn something every day from our clients, and hopefully they are learning from us in different ways,” Peebles said.