You are at:Home»Current in Carmel»Carmel Community»Carmel ceremony urges attendees to ‘Never forget’ atrocities of Holocaust 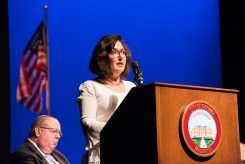 Maya Shmoel shares the story of her father, a Holocaust survivor. (Photo courtesy City of Carmel)

“Never forget” was a constant refrain during Brianard’s address at the April 28 ceremony at The Tarkington. Keynote speaker Maya Shmoel, an Indianapolis resident, shared the story of her father, Marcus Hirsch, being a Holocaust survivor. She did not learn most of the details of h until after he died 21 years ago.

“The message of the Holocaust does not change,” Brainard said. “Every day you read in the papers, watch on television or the internet, the violent graphic images of acts of terrorism carried out in the name of ethnic cleansing. We see terrorism acts in the name of religion. We see example after example of people showing intolerance of people that are different from themselves. This is not the 1930s and 1940s. We’re not in a World War against a single dictator, but we are dealing with faces of evil.”

Brainard said the issues remain the same years after the Holocaust.

“Which is why it’s important we talk about the Holocaust so we never forget what can happen when democracy fails,” Brainard said. “Not so very long ago in the heart of civilized modern Europe, democracy did fail. The courage to remember this horrific time is essential so that we protect our own society from a similar fate. It’s important to remember that the Holocaust did not happen during so-called primitive times. It occurred in an enlightened, cultured, well-educated society. We must remember it was professional engineers who designed and built the gas chambers. It was professional well-educated lawyers who built the Nuremberg laws, excluding Jews and others from German life and taking away many of their natural rights. It was medical doctors who conducted so-called scientific experiments on human beings at Auschwitz and other extermination centers.”

Brainard said it was ordinary people that were capable of doing evil.

“We must remember how that happened and must continue to strive to overcome intolerance and indifference so such terrible things can never happen again,” Brainard said.

“Sadly, 2017 is on pace for even more anti-Semitic crimes,” Wallack said. “We see a continued increase in Holocaust denials or Holocaust revisionism that either denies the Holocaust occurred or minimizes the severity, deflects blame or redirects blame to Jews. And we’ve seen discussion of the Holocaust without recognitions Jews were its primary victims. Since the election, we’ve seen reports all over the country of hate crimes or overt acts of prejudice.”

Wallack pointed out Indiana again refused to fail to pass hate crime legislation this year, one of the few states without a law.