You are at:Home»Current in Carmel»Carmel Community»Carmel Symphony Orchestra selects Hymes as music director 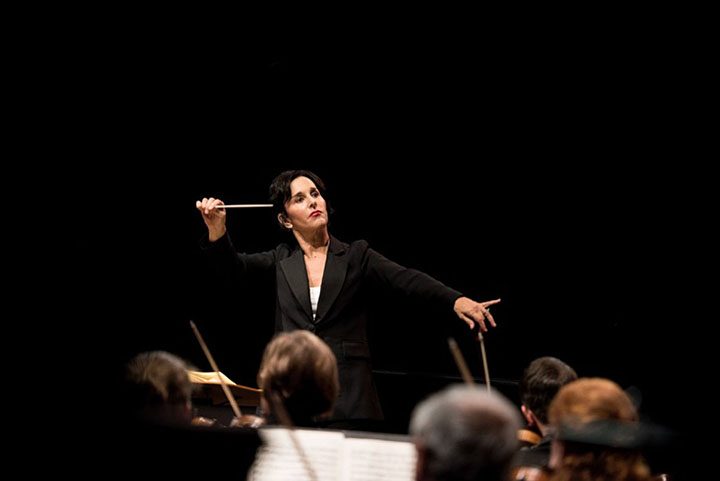 By Mark Ambrogi
mark@youarecurrent.com
Janna Hymes had a good feeling about her guest conductor stint with the Carmel Symphony Orchestra.
“It felt natural to be in Carmel,” Hymes said. “The Palladium is unbelievable. We just connected and made wonderful music together. Everybody was fantastic. I loved the community and everyone I met with.”
Hymes was announced as the new music director May 12 of the Carmel Symphony Orchestra. Hymes was the last of three guest conductors to audition for the full-time job, appearing April 8 with the CSO. The other finalists to replace David Bowden, whose contract was not renewed, were Kelly Corcoran and Ron Spigelman.
Hymes, who officially starts July 1, said she has lot of goals for the CSO, but isn’t ready to announced any yet.
“We have to decide where we want to go, where do we want to be in three years and how do we make that happen,” she said.
Hymes said the 2017-18 season was already programmed before she was hired.
“So this is going to be a transitional year where I learn a lot about the orchestraand the community,” she said.
So Hymes said announcing goals now wold be premature.
“I’ll have a sense by the end of the year, going into 2018 where we want to go,” Hymes said. “I want to get my feet in there and get going. The most important thing is to have every concert be sensational. I got the impression the board and the orchestra is ready to really grow. I think they are ready to go to another level with another person so that’s exciting. I’m looking forward to immersing myself in the community and learning more about the area.”
Hymes said she wants to learn what the community wants to hear.
Hymes has served as music director of Williamsburg (Va.) Symphony Orchestra since 2004. She also directs the Maine Pro Musica Orchestra, which she founded in 2008. She previously was an associate conductor of the Indianapolis Symphony Orchestra.
Hymes, whose home is in Maine, said the schedules of all three mesh well.
CSO opens the 2017-18 season Oct. 14.
For more, visit jannahymes.com.
Share. Twitter Facebook Google+ Pinterest LinkedIn Tumblr Email
Previous ArticleCity, Fishers mayor defend Messer’s salary, counsel services
Next Article Geist races support schools