You are at:Home»Current in Zionsville»Zionsville girl raising money to find a cure for juvenile arthritis 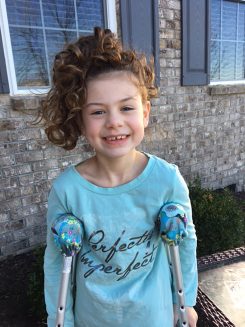 Sophia Ranalli suffers from juvenile arthritis but doesn’t let it keep her from participating on a competitive cheer team. (Submitted photo)

Sophia, 7, is competing in the Walk to Cure Arthritis May 20 at the University of Indianapolis. She was the event’s youth honoree in 2016. This will be her third year participating in the walk to raise funds for research for better medications and a possible cure.

The event includes a 3-mile and 1-mile course for the walks that begin at 10 a.m. As of May 10, Sophia is more than halfway to her goal of raising $3,000. Sophia, whose family recently moved from Whitestown to Zionsville, is a Boone Meadow Elementary second-grader. The walk team is named Sophia’s Shimmering Unicorns.

“One thing I think that is important to stress about someone who has juvenile arthritis is that it is very different from normal wear-and-tear arthritis or, ‘I’m getting old arthritis,’” said her mother, Jennifer Ranalli. “It’s nothing like that. This is an incurable autoimmune disease that attacks the body.”

Ranalli said it’s an invisible disease, so often it appears Sophia is the average active child. But some days she needs crutches or a wheelchair to get around.

“She has to not only fight through the pain but the fatigue and low-grade fevers to get through a normal day when she is having a flare,” Ranalli said. “The flares come and go. It’s very unpredictable.”

Sophia, who was diagnosed when she was 5 years old with enthesitis-related juvenile arthritis, takes medications to stop the damage.

“But they usually have pretty awful side effects and they’re definitely not a cure,” Ranalli said.

Ranalli said Sophia has raised money with a lemonade stand and helped her mother create an awareness T-shirt. The Scoop, in Zionsville, named her the Ordinary Hero of the Month for May. Ten percent of proceeds from sales of Sophia’s favorite ice cream, mint chocolate chip, will go to the Arthritis Foundation in Sophia’s honor. They also did a fundraiser at Buffalo Wild Wings in Anson, and Jill’s Cookies is donating a portion of sales this month.

Donate to Sophia’s team at walktocurearthritis.org/Indy/Sophia.