After making a career as a health care expert, Seema Verma felt a calling.

Verma, a Carmel resident and administrator of the Centers for Medicare and Medicaid Services, is committed to reshaping the health care system. 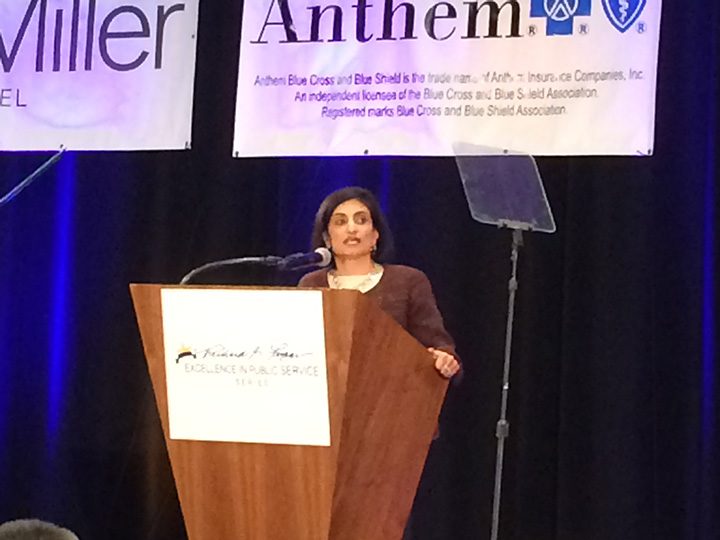 “The way I look at it is, our health care system is in a crisis right now,” Verma told Current in Carmel. “Obamacare is literally collapsing. Prices are higher. People have less choices. We’re paying more taxes. It’s just not working. You’ve got insurance companies that are refusing to offer health insurance to people. You’ve got folks that would rather pay a penalty than to participate in Obamacare because it’s so unaffordable. For me, I felt my country needed me. It was time to roll up my sleeves and to help solve this crisis that has been created by Obamacare.”

When she got to the podium to accept the 2017 Nancy A. Maloley Outstanding Public Servant Award and give a keynote speech at the Lugar Series April 21 at the JW Marriott in Indianapolis, she told the crowd, “I was at the White House yesterday, and we are working on it.”

That drew plenty of laughter.

The Republicans’ health care bill, the American Health Care Act, failed to get the Republican support it needed to replace the Affordable Care Act (also known as Obamacare) and was withdrawn.

“We’re not giving up,” said Verma, who works closely with Health Secretary Tom Price. “I don’t think we can give up, because it’s such a mess. It’s crumbling. People’s lives are at stake. They need a health care system that is going to put Americans in charge of their health care and not the government. We continue to be supportive of Congress’ efforts. Ultimately, what needs to happen is Congress has to pass a bill that is going to create a better health care system for our country.”

“I love working with Vice President Pence,” Verma said. “I think he’s supportive, he’s a gentleman and he’s a smart guy. He’s a great negotiator. He’s a leader and a mentor, and I appreciate the opportunity to serve with him.”

Verma said she has been in meetings with President Donald Trump discussing health care issues.