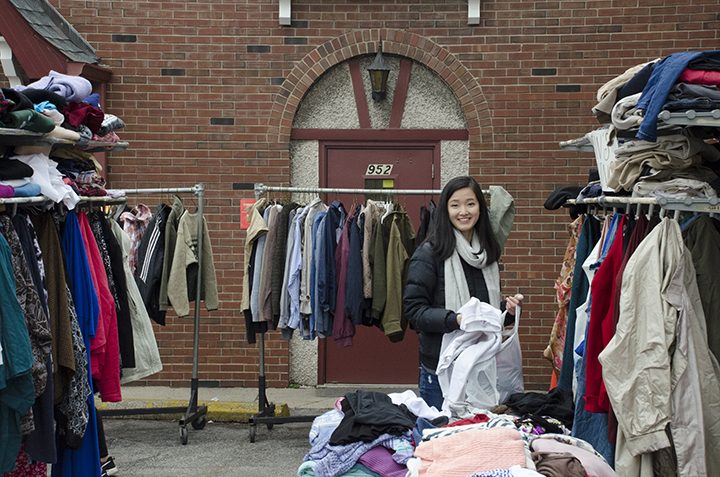 Grace Zhang works at the Street Store in Indianapolis. She founded the annual shopping experience for the homeless, and her efforts earned her the Prudential Spirit of Community award. (Photo by Sara Baldwin)

Grace Zhang’s spirit for giving has its roots with her grandfather in China.

“I was raised (early) by my grandparents in China, because when my parents came to the U.S. they were trying to balance work, school, language barrier, and they just couldn’t do it all, so I grew up with my grandparents for the first four years of my life,” she said.

During walks, Zhang and her grandfather would see the homeless in China. 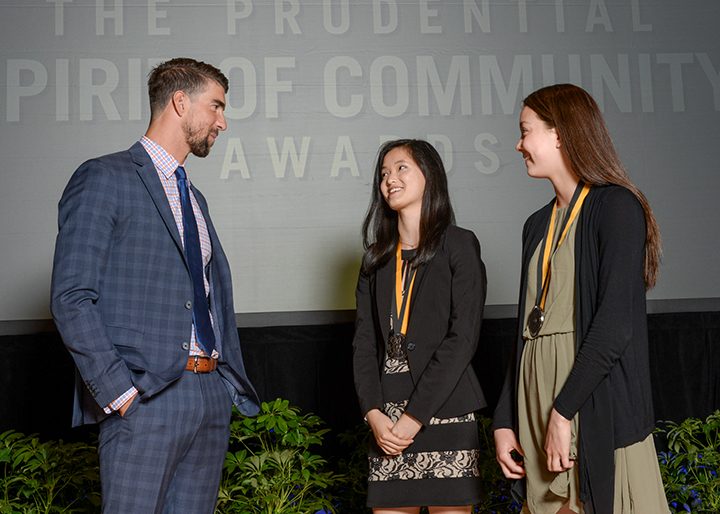 “My grandfather would always mention, ‘Just be grateful, because even you are loved and you are cared for,’” Zhang said. “At the time when I was young, I didn’t understand. I thought, ‘Yeah, OK, I’m loved.’ Now, I think it’s a really important way to think of it.”

Zhang, 18, a Carmel High School senior, earned the Prudential Spirit of Community award for Indiana high school students for developing the Street Store, which helps the homeless and needy in downtown Indianapolis. Zhang was presented the award May 7 in Washington, D.C. She received a $1,000 scholarship for her college education.

“The Street Store was basically conceived as an idea to bring a dignified shopping experience to the poor and homeless in our community,” Zhang said.

In addition to clothes, there were accessories such as wallets, belts, hats and scarves, as well as toiletries.

More than 12 donation drives happened during the inaugural Street Store in 2015, which Zhang said was a little chaotic. She was assisted by the Carmel Clay Library and the Monon Community Center.

Zhang won the award for her second Street Store in 2016. She collected 16,000 articles of clothing and raised $7,000, which was used to purchase items such as toiletries and undergarments.

“It was successful because everyone there treated each other like humans. There was no socio-economic class,” Zhang said. “There was no judgment. It was very compassionate.” 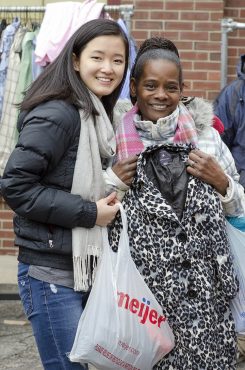 “We learned a lot from the first two,” Zhang said. “Last year we had too much clothing, so we ended up having to donate a lot of it. We learned from the first one, and we were nitpicky when we collected clothes. We focused more on it being high-quality and new.”

Zhang said she had a training session for the volunteers.

“We try to convey to them when the customers come, you’re expected to treat them respectfully, like you are working at a store,” Zhang said.

There was a food station set up by a First Korean Presbyterian Church.

Zhang is the president for Design for CHS, a club for students to create solutions for problems in the community. Several Design for CHS volunteers helped her run the store.

“What impresses me about Grace and her Street Store Project is that she has started a community service tradition to be carried on for years to come by (CHS) students,” said Jan Mitchener, a retired math teacher who was the sponsor of the Design for CHS club in 2016. “The first year of this project, I saw Grace taking on a lot of the responsibility and directing a few people to help her. The second year of this project, she started bringing more students in to the volunteer circle from other service clubs, forming committees, involving all three middle schools in the corporation and overall getting more students interested in making this project a success. I saw her training leaders to be able to take over her responsibilities to ensure the continuation of the project after she graduated. Grace’s Street Store project was not a one-year-only project. It was a vision to repeatedly help the less advantaged people of Indianapolis.”

Mitchener said Zhang’s sense of community service and the joy of doing the project was contagious.

“Grace has a giving heart, and her compassion for less fortunate people has launched a very successful community service project that will be helping the communities of Indianapolis for years to come,” Mitchener said.

Laura Moore, who took over as club sponsor this school year, said Zhang is dedicated in all her endeavors.

“She had a grand vision for the type of experience she wanted to bring to the Street Store participants, and she worked through all of the necessary components to ensure her clients had an enjoyable and respectful experience,” Moore said.

Personal: Has a weighed cumulative GPA of 4.31 on a 4.0 scale. Her father, Hongzhou Zhang, works in information technology for Eli Lilly, and her mother, Yuezhong Hu, teaches Chinese at the International School of Indiana. Zhang will attend Case Western Reserve University to study biomedical engineering on the Milton A. and Roslyn Z. Wolf Scholarship, which includes tuition, room, board, food and travel abroad. The scholarship is for leadership and service.

Activities: Editor-in-chief of HiLite, CHS newspaper, this school year; member of the Carmel Mayor’s Youth Council for two years; member of the Principal’s Advisory Council, meeting with principal every two weeks; has played the piano for 10 years.

Future plans: Wants to be a physician. “I want to use my compassion to help the homeless in smaller hospitals and allow the homeless to get the treatment that they wouldn’t normally have.”