The Zionsville Police Dept. is without available K9s as both dogs are battling injuries of health issues.

Jelka, a 2-year-old Belgian Malinois, is recovering from surgeries after being hit by a pickup truck May 15. She was playing with a ball with her handler, ZPD Officer Josh Stutesman, when it deflected into the street near Stutesman’s Westfield home. She was struck the truck and suffered a compound fracture in her left hind leg and a hole in her abdomen that pushed her organs forward, making it hard to breathe. 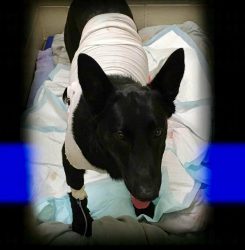 ZPD K9 Jelka is recovering from surgeries after being struck by a pickup truck May 15. (Submitted photo)

Jelka was rushed to MedVet Indianapolis for a two-hour surgery. On May 17, she had another emergency surgery after complications with a chest tube led to “very grave, dire circumstances,” according to ZPD Chief Robert Knox.

“She came through surgery just amazing. She’s doing well right now, (although) yesterday morning I was told she was doing great and 15 minutes later the doctor called and said something took a turn,” Knox said. “It’s been quite a ride so far.”

Police don’t know yet if Jelka will be able to return to her role on the force.

“Jelka may never work as a police canine again. However, there is always a chance her nerves and bones will heal beyond expectations,” ZPD Sgt. Adrian Martin said. “This adversity will limit the agency to one K9 until other options are explored or if Jelka makes a substantial recovery.”

Eso, ZPD’s other K9, is also having health problems and has been unable to work for the last couple of weeks. He’s been diagnosed with irritable bowel syndrome and is beginning to develop arthritis in his hips and back. His handler, Sgt. Brad Kiefer, hopes he can return to work soon.

“There’s not anything that’s just going to cure it. It’s something he’s going to have for the rest of his life. We’re trying to see if we can get something to get him back to work where he feels good enough to work where he’s not constantly going to be in pain or sick while working,” Kiefer said. “Right now it’s just kind of been a trial and error trying to find a different combination of medications that’s going to get him feeling at least better than what he is now.”

The ZPD K9 program is funded through donations, and Knox said that Jelka’s vet bills have exceeded what was in the fund. The vet estimated costs at $10,000 to $13,000, but Knox thinks it could go higher.

“I don’t even have a line item for the K9s (in my budget),” Knox said.  “Everything has been donations so far. If we lose a dog right now, and if to have to buy another one, I don’t have the funds to even do that.”

Donations for the program may be made by sending a check to ZPD and writing “K9 fund” in the memo line.