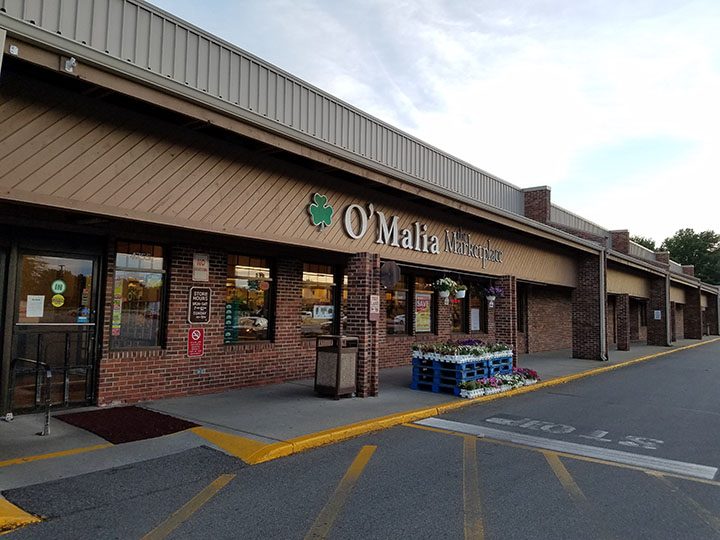 O’Malias is on the southwest corner of 126th Street and Gray Road. (Photo by Ann Marie Shambaugh)

Her five-year-old granddaughter wanted nothing more than to find a watermelon, a classic summertime fruit, under the tree. So she went to her neighborhood grocery store, O’Malia Food Market, and had a good laugh with the employees there about her seemingly impossible predicament.

“Three days before Christmas I get a call from them. Her watermelon was in!” Shull said. “Who would do this? O’Malia is irreplaceable.”

Shull, a 30-year Carmel resident and O’Malia shopper just as long, is among a group of residents urging friends and neighbors to support the store, as Marsh supermarkets, which purchased the assets of O’Malia Food Markets in 2001, searches for a solution to its financial troubles. Marsh has already closed many of its stores, and the future of those that remain is unclear.

“The plan is for all 44 stores to stay open for good,” Marsh spokesman Tom Mulligan said. “For that to happen, Marsh will need to find a buyer or new business partner/investor. While the process is going on, we’re not going to comment on the outlook for particular stores.”

Many nearby residents think the future is bleak for O’Malias, which has been at the southwest corner of 126th Street and Gray Road for approximately 35 years. When Marsh purchased O’Malia it allowed the smaller chain to keep its name and much of its neighborhood feel. But some neighbors think it might be time for a change.

Brookshire neighborhood resident Jill Cooper said she would “hate to see (O’Malia) go” but is taking a proactive approach toward the future of the shopping center. She frequently shopped at California-based grocery store Trader Joe’s when she lived in North Carolina, but now that she resides in Carmel she finds the closest location in Castleton too inconvenient. So she posted contact information for Trader Joe’s on local social media sites and urged others to reach out to them.

Expecting a handful of replies, she was blown away by the response. She estimates her post led to more than 100 people contacting Trader Joe’s.

“I was amazed at how quickly the responses came in and how positive they were,” Cooper said. “I am just hoping that (Trader Joe’s officials) have heard our community and realize that Carmel would be a great spot for their business.”

Trader Joe’s spokeswoman Alison Mochizuki said that Carmel is not in the chain’s two-year plan at this time.

Rae-Jean Johnson, a Kingswood neighborhood resident of 23 years, has been an O’Malia shopper as long as she can remember and worked one of her first jobs behind the butcher shop counter there. She believes it’s crucial that a grocery store remain at that corner, and she’s hoping it will be O’Malia.

“There are some neighborhoods near there that have retiree-aged folks that truly depend upon that store,” she said. “It’s proximity to their home helps them maintain more independent lifestyles longer.”